before the elephants reach the beach 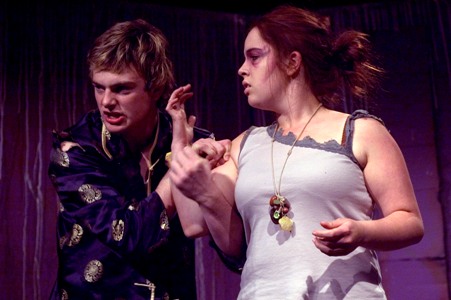 Produced August 2006 as part of BKu‘s Duofest, with Chris Finnigan and Shasta Sutherland. Photo by ‘pling.

Download Before the elephants reach the beach as a Word doc.

A beach, on the outskirts of a city. A small campfire burned to embers. Two figures talking with their feet pressed into the cold sand.

burnside: I need to paddle out past the breakers before the elephants reach the beach.

constance: How long have we got?

constance: The last thing I heard was about forty five minutes ago – they were setting their spears on fire and throwing them at the walls.

burnside: They did that.

constance: But I thought when they reached the walls they were driven back.

burnside: They were driven back. Everyone left in the town was up on the walls, and we drove them back. But we can’t repair the gaps in the walls, and now they’re bringing the elephants.

constance: Was that the signal for you to run?

burnside: You’ve got a raft.

constance: I’m not giving to you.

burnside: One of the guards on the wall told me that the peddler was hiding down on the beach. Are you still trading?

constance: What have you got?

burnside: I went through the restaurant before I left and I stole everything good. I got

burnside: an amphora of fish sauce –

burnside: a mixing bowl blessed by the high priest!

burnside: Maybe five minutes if people stay on the walls and fight. But no-one’s going to stay to fight elephants.

he’s got nothing I want and he’s going to die!

burnside: What do you want for the raft? What can I give you?

constance: You can talk to me.

burnside: What do you want me to say?

burnside: We don’t have time, I’ve got to get out past the waves-

constance: Tell me about who you are.

burnside: I’m a cook at the Sagantum Kitchen-

constance: No. Not what you were. Who are you now?

burnside: I’m someone trying to escape before we all get trampled.

constance: Tell me about that.

burnside: I’m going to buy your raft. I’m going to paddle out past the breakers and get over the sandbar. I reckon it’ll take me two hours to get on the big current that runs south around the channels. If the wind doesn’t change in the next forty or fifty hours I’m pretty sure the current will drag me in a circle and dump me on the coast about three days south of here.

constance: You’re not going to get past the breakers. You’re carrying too much weight.

burnside: They must be through the walls.

burnside: Constance, why are you sitting here?

constance: I can’t fight and I can’t swim. I thought I might as well keep trading.

constance: She…? Making a new start, then, are you?

burnside: Yes I am.

constance: I saw you with her once. Looked like you’d had a big night.

constance: Not any more.

burnside: No more big nights for anyone now.

burnside: You ever have a big night?

constance: Listen, stay. Don’t try and swim out past the waves. You’re carrying too much weight. Stay with me.

burnside: If you don’t give me that raft in the next twenty seconds I’m dead. The elephants are in the city, I can hear them.

constance: It won’t be for long. Just stay until they get here.

burnside: I don’t want to die. If I can just get past the breakers and on to the open ocean I can start again. I’m going to start again. I want to.

constance: If I break both your hands you can’t swim.

burnside: You can’t make me want to stay.

constance: I will give you everything I ever traded. Don’t you want

I don’t want to die on my own.

burnside: Get off me! Why should I die with you just because you don’t have the guts to save yourself? Forget the raft, I’ll swim.

constance: Burnside, don’t. You’ll drown. Burnside, take the raft. Go on. Have it. But you’re too heavy. You won’t make it past the waves. You’ve got all of this stuff weighing you down.

constance: Let me take all this weight off you.

All this memory clogging up your brain

All this ambition in your blood streams

These instincts buried in your muscles

All these skills you learned

All that fear and panic

Let me strip it off you.

Constance strips Burnside of everything that makes him Burnside.

constance: You want to stay with me?

constance: You know they’ll kill us when they get here. They’ll trample us with elephants.

constance: You want to stay with me?