Sun Drugs at the Front Cafe this Friday 30th 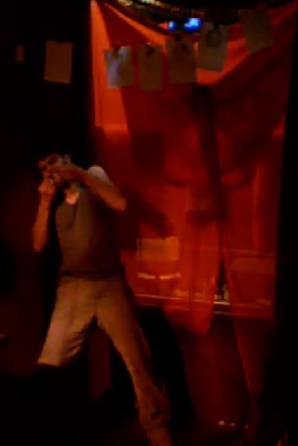 Sun Drugs at the BATS Theatre in Wellington

Blessed, blessed The Internet. While in Wellington performing Sun Drugs as part of the New Zealand Fringe Festival a few week, I received a lovely review from a Ms Hannah Smith on New Zealand’s Theatreview website. Hannah’s analysis was very much appreciated: while extremely positive overall, she had some thoughtful suggestions about Sun Drugs’ overarching structure and flow. A sample:

These disparate storylines are woven together and the whole is narrated in a combination of novelistic exposition and screenplay style camera directions with brief outbursts of physical exertion. It is vigorous, quirky and performer-centric.

There is definitely an intriguing piece of theatre here, though at times the different parts of the performance work at odds with one another. The performance art elements are arresting and affecting but many of them do not serve the story that we are being told. When they work they are marvellous – the way in which Cancer and Smallpox are differentiated from each other in their scene for example – but other elements, such as the extended shaving sequence at the beginning, are never made significant.

I enjoy how these sections break up the less visceral narrative sequences, but I think if this work is to be further developed they would need more functionality and to be tied more tightly to the narrative. 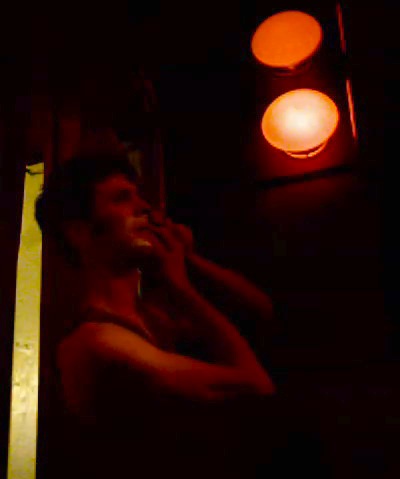 This element was never made significant.

So, fair points, and I will ponder them further as the show undergoes further edits. It was a lovely review, and I was grateful, and that was it. Then a couple of days ago, while filing away coverage from the NZ trip, I returned to the Theatreview site and discovered that one Ms Robin Kerr had posted a response to Smith’s review:

I must disagree with you. I loved Sun/Drugs, it had a quality of Performance Art which we rarely see in Wellington. I think to construe it as a piece that endeavors to be theatre, to tell a cohesive and understandable story is to miss the point of Sun/Drugs. The beauty of this work was when we understood nothing, because we felt everything. The power of the piece was how unhinged it was. I found myself sitting there with absolutely no idea what on earth might happen next. A creeping sense of danger that I might be his next acomplice in one of his deranged debarcles. But a growing sense of faith as I was drawn to this charismatic performer, he was our leader in this strange journey because he seemed so sure of himself, even as he demonstrated how to insert a cellphone up your Vaginal tract – he was so straight faced and confident in what he was doing.

Though he allowed us to laugh and enjoy ourselves, and though it was in a theatre bar, my understanding was that he was drawing from the traditions of the performance artists such as Yves Klein or Carolee Shee. People who challenge us not to comprehend – but to take us to the edge of the uncanny, via the limits of our comfort zones. He made us feel like voyeurs by making himself and others the victim in this weird game that we found ourselves enthralled in.

The parody ‘prom queen’ storyline that eventually brought the whole thing together at the end I thought was the weakest element because it allowed me, and the rest of the audience to feel safe and comfortable, have a chuckle, able to predict what would happen next. If Mr. Blind would take any advice from us I’d say less story — more surreality. The thing he needs more of to get this piece to reach its potential, is definetly drugs in the sun, the last thing he should do is get a director! 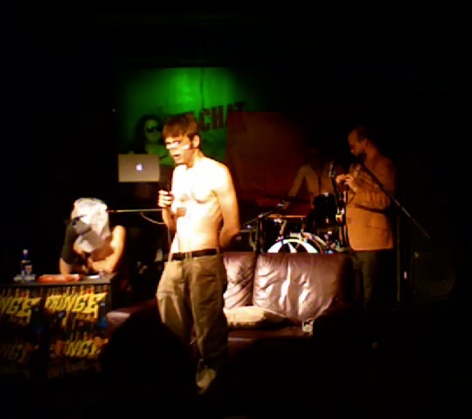 Needs more drugs in the sun.

Loveliest – thing – ever! Thank you, Ms Robin Kerr, whoever you are, you are full of wisdom and I dig you. I don’t know who is right, Smith or Kerr, but if the show falls somewhere in the middle of those two opinions I’m going to be pretty happy.

Which is all a longwinded way of saying that Sun Drugs is on this Friday 30 April at the Front Cafe in Canberra, as part of Traverse Poetry’s monthly Poetry Slam. This one is themed HUNGER and it will be charming, as they always are. Please come and get your fill of delicious poetry, novelistic exposition and vaginal tracts. Word.