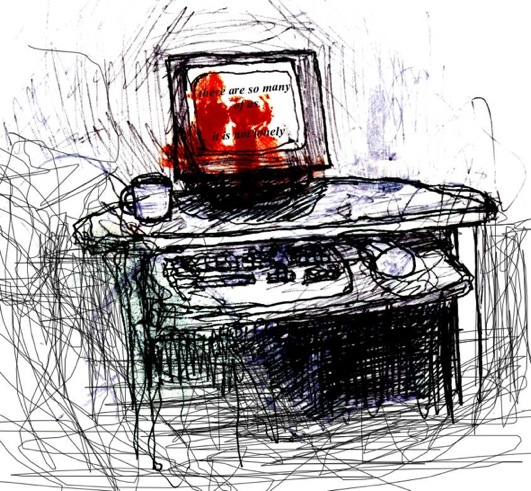 You know when you have an idea for a new TV show, or a new shape of table, or a new currency, and you think ‘That’s a good idea,’ and then you wonder why, if it’s such a good idea, you haven’t seen it in action already? A few nights ago, I came across an old word file entitled Television Play. I’m guessing I wrote or assembled it sometime in 07-08, based on the other script fragments I’d copied and pasted into the file in an attempt to shore it up.

A quick examination revealed the concept to be a work of genius: ‘Two stations are set up on the stage/performance space, each representing a TV channel, producing and broadcasting television. Each TV station possesses a small complement of technical lighting/sound/FX gear, a technician and 2-3 actors.

‘The two stations broadcast different shows, trying to outdo each other in terms of ratings. Each TV program is performed centre-stage by the performers from that channel. At times, both stations broadcast shows simultaneously, and the stage is host to two completely unrelated performances in the same space at the same time.’

I wrote those words. Sometime in 07-08, I sat down at a computer and wrote those words, without a trace of irony or any doubt that it was a brilliant idea. And even in the cold hard light of 2010, as I was reading them I could almost find myself following Finig 07-08’s demented moon logic. After all, if one theatre show on a stage is good, then surely two shows on a stage is twice as good?

Kindly, in the unlikely instance of someone not getting the idea behind this drooling gibberish straight away, Finig 07-08 provides us with an example of the sort of thrills and spills you might experience as an audience member during a performance of Television Play: Channel A broadcasts a sitcom. The show is introduced with a blurb and ratings in the style of a (spoken / projected / handwritten) TV guide: ‘Charlie Goes Wild: Charlie can’t believe that Fred has never been to a nightclub before. PG, sexual references.’ Channel A’s two performers go centre-stage and begin performing. The sitcom, like all the other programs in Television Play, is an incomplete fragment inspired by or scavenged from shitty TV. The technician for Channel A plays the soundtrack, creates sound and lighting effects (eg canned laughter), and voices additional characters.

While Channel A’s sitcom is being performed, Channel B begins to broadcast a nature documentary. A performer from Channel B steps into the sitcom scene and begins narrating David Attenborough-esque lines about a rare species of sloth, while the technician creates sloth sounds and special effects. The two scenes co-exist for a few moments, then one or the other of them dissolves and dies and the performers return to their channel’s HQ.

Let me be blunt: when I expend my time, energy and money on a night at the theatre, that is precisely what I want to see. Multiple performances intertwined on one stage, mixed in and out of each other and glowing with the familiar signifiers of commercial TV. I realise that Finig 07-08 has left himself open to the interpretation that this could be the framework for a Theatresports Impro evening, but I’ll speak for him and say No Fucking Way. Two separate TV shows being enacted live simultaneously on stage at the same time? It needs to be shaped, sculpted by a director with an eye to the overarching ebb and flow of story, character, sound, light and pulp.

Now while the text for Television Play itself is less than a page, and is basically exactly what I’ve just described, Finig 07-08 clearly went on some high-voltage scavenger hunt through my back catalogue to find any and every fragment of script that might be suitable for performance as part of this show. I am pleased to see TV Guide, which Canberra Youth Theatre recently put on stage, alongside short scripts such as Sad Threesomes, Sitcom in three time periods and Trolling Prostitutes.

Also, my magpie instincts stretched so far as to transcribe the dialogue from the finale of The Usual Suspects (‘The greatest trick the devil ever pulled was convincing the world he didn’t exist… and like that – he’s gone!’), the preview for the Michael Bay / Ewan McGregor masterpiece The Island and the stomach-turning first entrance of the President in the pilot episode of West Wing.

‘I am the Lord your God. Thou shalt worship no other God before me.’ Bet you think I’m making that up.

All in all, it’s either a visionary work of genius, or it’s written by someone whose aesthetic instincts are so close to my own that I have no objectivity. For that reason, I need now to turn it over to YOU: to read, assess, and to let me know, in that solemn sad voice you sometimes use, whether it really is as good an idea as my every instinct cries out.