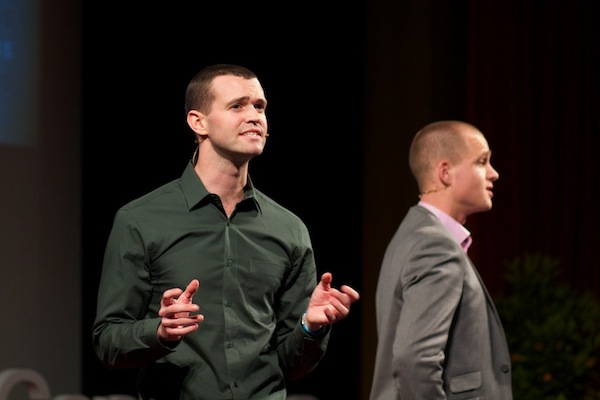 This year, science-theatre ensemble Boho Interactive (Mick Bailey, Jack Lloyd and myself) was invited to talk at the Canberra TEDx Conference. On Saturday 24 September, Mick and Jack presented a performance-lecture discussing Boho’s work in communicating ideas from complex systems science through interactive theatre.

Following the talk (which will soon be online), Boho has launched a new website with a swathe of new content. As it says on the front page:

Following our performance at TEDxCanberra 2011, which was kind of a pilot for us in combining lecture and storytelling with interactivity, we’re working on formalising our work over the last few years, categorising it, and considering where various techniques are most effective. Figuring that others might find this useful too, over the next few months we will be posting regular articles on interactive performance styles and tech, looking at ways that audience members can contribute to their own appreciation of a work, resulting in a richer artistic experience.

To kick things off, we’ve posted up several articles sharing some key lessons we’ve learned through our experiences making interactive work. First of all, Jack discusses the Treasure Hunt model, which Boho has used on a few occasions:

The Treasure Hunt is a scene we love using because it gets the audience working directly with the environment, so it’s great to break down walls. Depending on what you want to achieve, there are good ways to get story content out at the same time… The focus is on exploration, experimentation, puzzle solving and discovery. Improvisation is generally not necessary, the scene itself is kind of the star anyway so performance elements can be quite minimal.

Secondly, I’ve scribbled a little bit about failure – what it means when an interactive sequence falls apart in performance, or when the audience completely fails to understand or solve the activity you’ve created for them.

In True Logic of the Future, we had a puzzle built around the Logic Piano (a replica of WS Jevons’ 19th century early computer construct). In this sequence, two scenes played out simultaneously – one set in a hospital, and one set at the scene of a crime by the city’s dam. The audience used the logic piano to separate out the two scenes, filtering the messy sequence into its constituent parts.

Most audiences ran through the sequence between 5 and 8 times before hitting on a correct combination of keys. Some audiences got it within 2 or 3 goes, making the whole thing seem quite easily. During one performance, though, the players ran through the scene 13 times without hitting on the correct combination. As a performer, that’s desperate. You can feel the frustration mounting as the audience are trapped in this same section of the play, and the concern of the players as they fear that they might not be able to solve it. And when a sequence of the show that normally runs for 8 minutes runs on to 16, you begin to freak out that the show is going to run hugely over time, and everyone will be upset.

Have a butcher’s at the site, and feel free to drop us a line or comment if you have anything to add (or dispute).

A shot from probably the best Boho sequence in our whole company history: Flying Dudes. Image by ‘pling.

be the assassin serious theatre – Void Without Void