So I went to the cinema, I know, don’t start, it wasn’t a good idea, I realise that now. Let’s not talk about the film itself (goddamn movies), the main thing to note is that they screened A NEW BATCH OF TRAILERS.

Okay to start with there was a short animated logo and a voiceover said ‘CINEDIGM: A NEW PARADIGM IN CINEMA’

And that was the whole ad. That literally is all we know of Cinedigm, and if you know more DO NOT TELL, you’ll ruin it for everyone.

Next up was a trailer for a film where a young boy is giving a voiceover saying stuff like, ‘Mom was sad after Dad left us, she didn’t like being a single mom, she was sad and lonely and sad, and we were incomplete’

The mom apparently is Kate Winslet getting her sad on, she looks pained in every shot, it is tiring to look at her

Luckily before too long Kate Winslet and her son are kidnapped by escaped fugitive Josh Brolin who forces them to drive back to their house and dress his wounds, he is on the run because he just escaped from jail where he is serving a sentence for murdering a dude, here he is 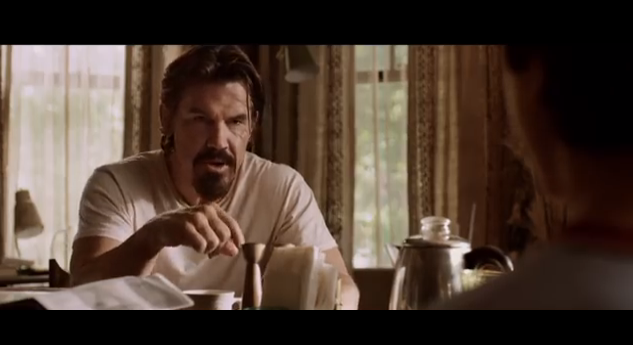 Anyway while Josh Brolin is holding the mom and son hostage at their house they all start opening up to each other and it turns out Josh Brolin is a little rough around the edges but basically has a heart of gold, and he starts teaching the son to play baseball, and Kate Winslet’s sad face creases a little in what looks like maybe happiness? 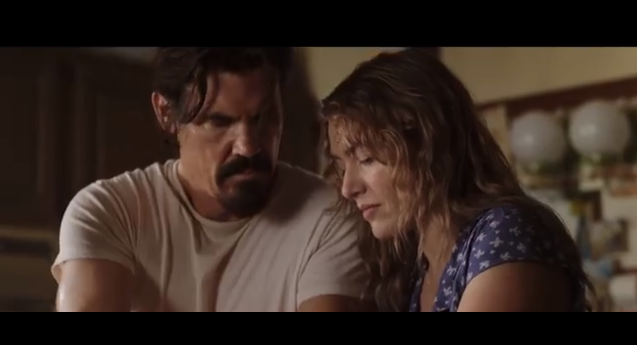 the problem is, and I didn’t include a screenshot of this, that this otherwise-brilliant reboot of the pottery scene from Ghost is actually super gross, and watching romance spark between the pair of them while their hands are squishing around in a bowl of overripe fruit is pretty meh

Then there’s a bit of Josh and Kate dancing, we hear him say the line I WOULD FACE ANOTHER 20 YEARS FOR 3 MORE DAYS WITH YOU and the boy crying when a shot is fired, so presumably it ends well, or it ends sadly, or it ends some other way, but it DOESN’T end with Kate Winslet and her chump son joining Josh Brolin on the road for a life of madcap adventure fleeing from John Law 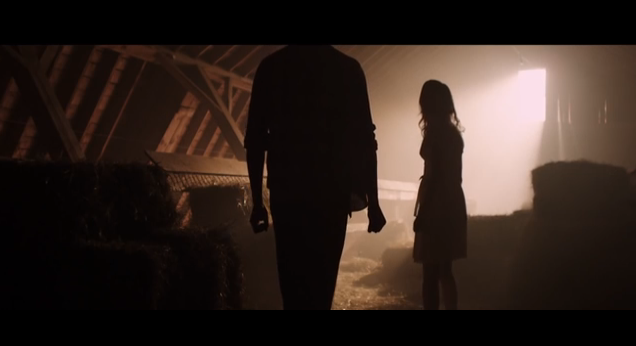 YES. Jess likes romance, and pie, so she’s likely to be more sympathetic to the themes of this film than I am. But we can’t be sure, until she sees it. 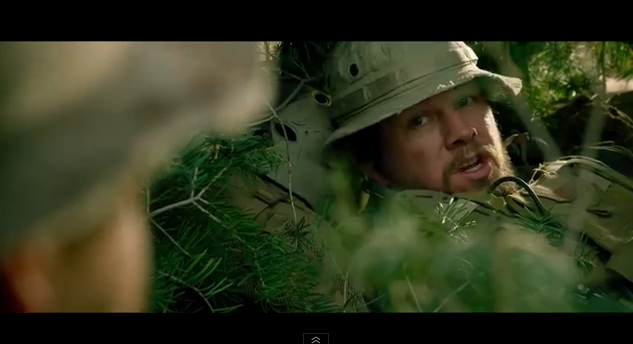 Were you jonesing for some jingoistic American war exploits where a few hundred kilos of gym-bred Californian beef dresses in fatigues and engages in cloying bromance while firing at indisciminately evil Middle Easterners? Marky Mark and Eric Bana have you COVERED

The plot seems to be, a troop of US marines have been cut off behind enemy lines in Afghanistan, they are trying to kill a commander of the TALIBAN, something goes wrong, they are up against an unexpectedly large number of enemy soldiers, there is lots of shooting and shouting and fist bumps, at one point someone yells ‘God’s looking out for us’, and judging by the title and the quick cut action shots at the end of the trailer presumably only one of them survives 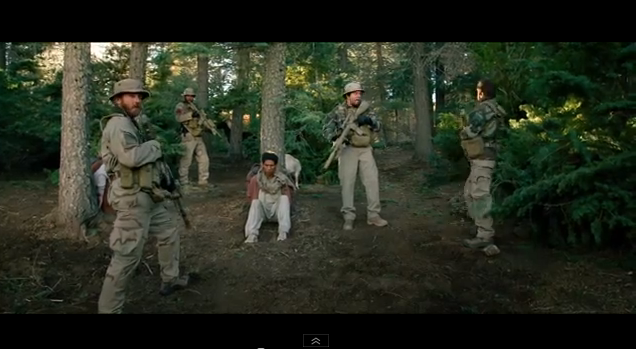 If I’m not mistaken, a bit over a decade ago we invaded Afghanistan. My miniscule contribution to Australia’s tax dollars helped fund our invading army, which fought the Taliban until 2011 or so. At first we drove the Taliban back and installed a puppet regime. The Taliban moved back in, they once again control large portions of the country, and our troops are leaving. So we lost that war, and frankly, it’s hard to see how they could possibly be worse off than if we’d just left them the fuck alone. 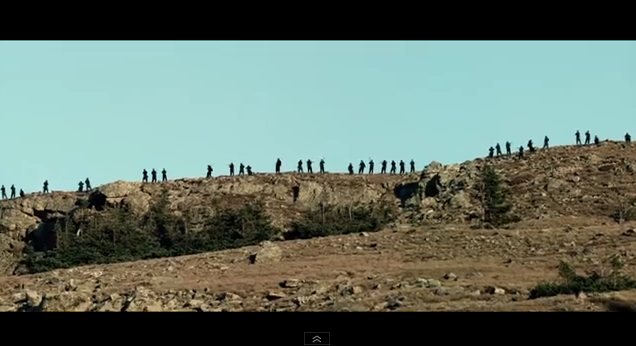 Let me lay my cards on the table here: any US soldier in Afghanistan has my sympathy, and for what it’s worth, I think they were trying to do the right thing. But I don’t give a fuck how tough it is to be a blue-eyed blond-haired yankee marine dealing with the Taliban compared to how it is to be an Afghani in that same situation. Show me that movie instead.

Of course I’m giving this bullshit too much credit – the aim is not to show anything about Afghanistan, the aim is to run around a few desert-trimmed soundstages in a Los Angeles film studio dressed in combat gear, throw in a few explosion effects and a soaring string soundtrack, plant brown-skinned people in crosshairs and make a shitload of cash. 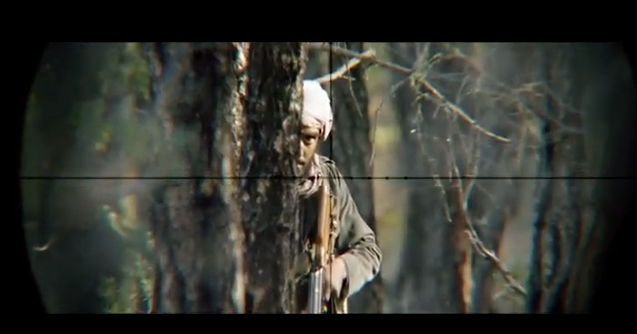 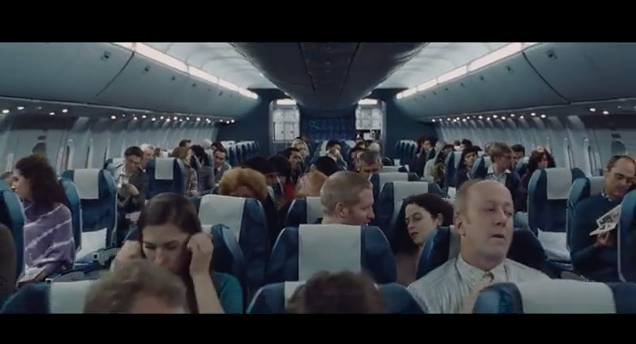 Now this is more like it. Liam Neeson gets on a plane and trades some world-weary banter with the woman sitting beside him – she likes flying, he hates it – and then we discover he’s an ‘Air Marshal’ which is the fancy American word for SKY POLICE.

(if I’d been making this film it woulda been called LIAM NEESON, SKY POLICEMAN)

But THEN, Liam gets a text message saying ‘Hullo Liam Neeson’ or whatever, and he is the shocked and replies 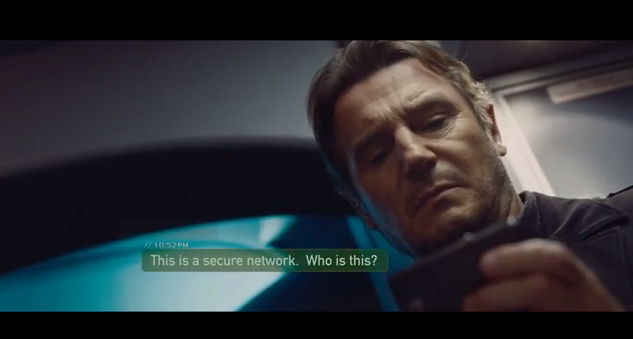 because it’s 2014, we see the text message appear on the movie screen around Liam’s head

the reply exceeds my expectation A Lot: 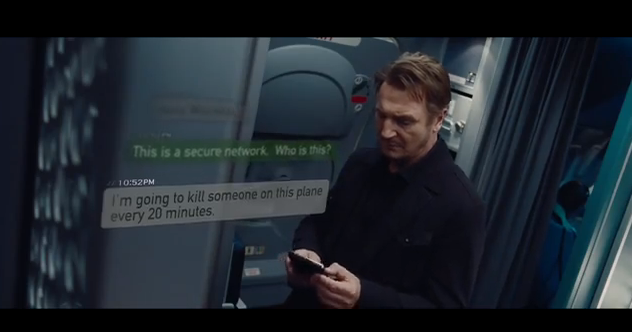 Yes! From a dramaturgical point of view, the unknown text message has introduced a new element to the film: CONFLICT. Someone wants to kill people on the plane at a rate of 3/hr. Liam (we presume) is going to do his best to stop them. How will this play out? 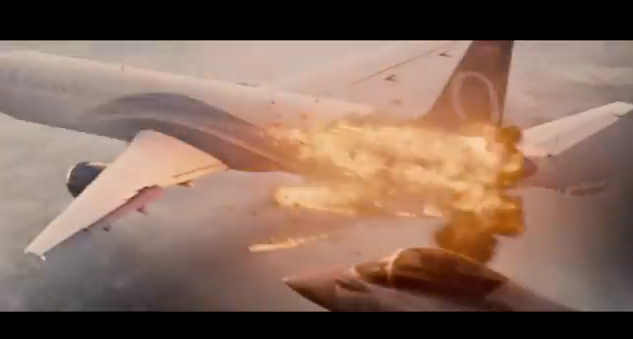 Goddamn you Non-Stop for having the best idea in cinema of the year already, and goddamn you also for inevitably blowing it, because there is no way a Liam Neeson film can carry off a good concept without descending into inane bullshit. My heart, my heart.

Can’t turn a Tom Clancy book into a film without a lantern-jawed square-shoulder jock dressed in a suit beating the shit out of a foreigner in a hotel bathroom. This clip opens in confusing fashion – the blandly handsome lead is led into his Moscow hotel room by a tall black man with a Russian accent. Okay, sure. Then the black dude starts trying to shoot the hero. 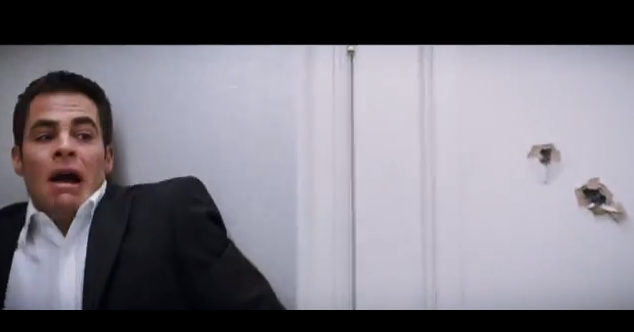 This trailer was trading on its ‘here is a full scene of the movie that we’re sharing with you’ gimmick, so I had to watch the full fight scene in all its inevitable shaky-cam bullshit glory. Our lead disarms the bad guy and proceeds to beat the shit out of him like a real true American 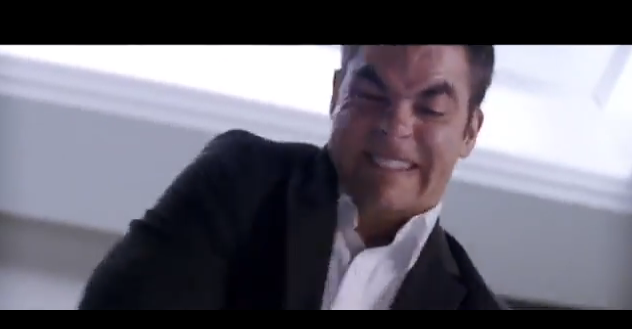 maybe I’m being oversensitive, but maybe I’ve reached a point in my life where I don’t need to see any more caucasian American heros killing any more non-white foreign bad guys. Maybe that time of my life is over. Maybe that part of history is over. Maybe Tom Clancy is a nightmare from which we can all wake the fuck up now, maybe? 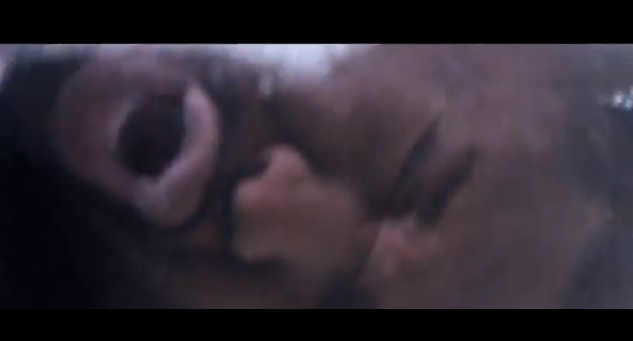 and then in some weird kind of epilogue to the whole trailer experience, we see the hero meet an aging Kevin Costner on a bench 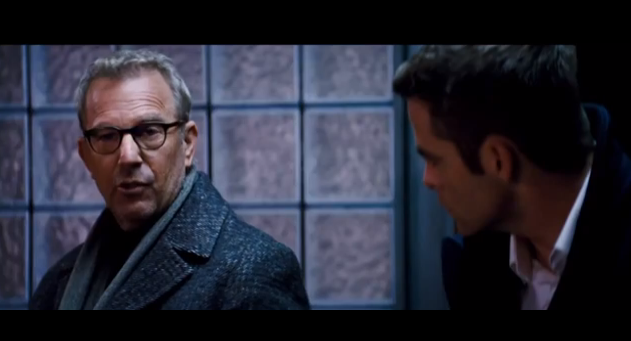 hero – what do you know about it?

kevin – the first person I ever killed was innocent.

all this and I still had a full feature length flick to get through. fuck movies, man.