Thoughts on a past project: Chosei: Frozen Shape. 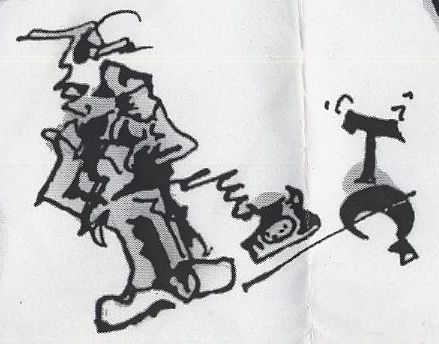 In 2002, during our second year as independent theatre-makers in Canberra, myself and Nickamc and Muttley were spending a shitload of time together getting drunk and stoned in odd spots around the city, talking about theatre and making plans. The upshot was that when Jules Fleetwood, Amy Feldman, Nickamc and Muttley formed Opiate Productions in early 2002, Nickamc and Mutt straightaway flagged Opiate’s second show in November for the production of an original piece by the three of us. That piece, produced as Chosei: Eternal Life but known to all of us thereafter as Chosei: Frozen Shape, was paired with Jules’ adaptation of Edgar Allen Poe’s black comedy Doctor Tarr and Professor Fether.

From my perspective, the most interesting part of the play was the writing process. Cramming together the formulas from Jeff Noon’s Mappalujo and Cobralingus experimental texts and fitting them to our purposes, we agreed that each of us would provide a short story and we would mash the stories into one meta-work. The source texts we decided on were:

Brian Aldiss‘ Swastika, an interview between Adolf Hitler and a journalist in 1972 in a fictional universe where Hitler managed to elude capture and go into exile in South America.

Greg Egan‘s Axiomatic, a parable of a man who uses a personality-alterating computer program to remove his empathy and remorse to enable him to revenge himself on the man who raped and murdered his wife.

Anton Chekhov’s Death of a Clerk, the bizarre tale of a clerk who accidentally sneezes on a superior, and apologises over and over until finally he dies of shame.

Ted Chiang‘s 72 Letters, a fascinating novelette set in a universe where science as we know it is incorrect, and it is the Jewish Kabbalic traditions that best describe the way the world works. The protagonist is a programmer who creates mechanical Golems by composing the correct formula of 72 mystic letters and then attaches it to the back of clay statues, bringing them into life.

Tibor Fischer‘s A Portrait of the Artist as a Flaming Deathmonger, a narrative-free rant from the perspective of an artist who uses murder as the medium through which he expresses himself. 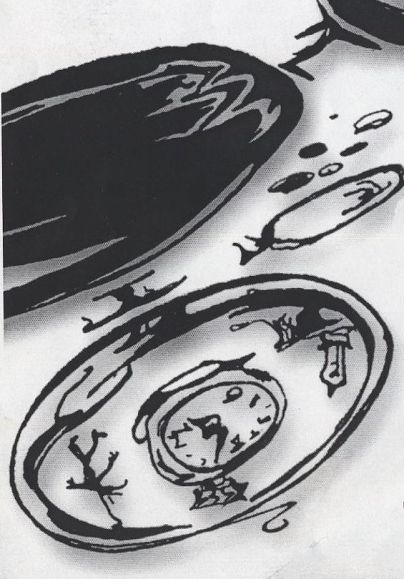 In our earliest notes, the stories combined in a rough mash in which the nightclub of Homo Kareoke was the setting for a duel to the death between two DJs, while Hitler and LBJ debated politics in another room. Gradually, though, the elements of the stories began to meld together in a fluid, albeit impossibly convoluted form.

The title is taken from a piece of terminology from the game of Go. A Chosei (alternatively translated as ‘frozen shape’ or ‘eternal life’) is a situation in which the players fight back and forth over the same patch of board in an eternally recurring cycle.

In its final produced form, the narrative ran like this:

In the aftermath of WWII, Stalin made a covert deal with Jewish mystic scientist John Genius: Stalin provided Genius with a laboratory in which to conduct his experiments, in return for which Genius would predict Russia’s future and provide Stalin with regular forecasts. Genius was installed in a laboratory in the basement of an unused prison camp in Siberia, regularly supplied and provided with the tools he needed to produce his forecasts.

The method through which Genius scried Russia’s fortunes was to analyse the patterns and formations produced when two people played a game of Go. Every day, Genius’ two subjects would play a game against each other while Genius interpreted the placement of their stones and telegraphing Stalin with his predictions. The two players who played these daily games were Adolf Hitler, aged 42 and 56.

How does this work? According to the play, the Soviet government had secretly obtained two samples of Hitler’s semen, one from 1931 and one from 1945. The 1931 sample was taken from the body of Hitler’s then-girlfriend Geli Raubel, whom Hitler is widely believed to have murdered. The 1945 sample was removed from the corpse of Eva Braun after the Soviets captured the bunker where Hitler and Braun had committed suicide. Using the Kabbalic arts, Genius was able to take a sperm from sample of semen and grow it in a bathtub into a full-blown simulacra of Hitler as he was at the moment of ejaculation.

Consequently, the two Hitlers are very different in behaviour and outlook. The 42 year old Hitler remembers everything up until the final time he had sex with Geli Raubel in 1931, hours before she died. He has no memory of the war he precipitated, no memory of his death and no memory of shooting Geli Raubel in the chest. The 56 year old Hitler is a replication of Hitler as he was during his final sexual encounter with Eva, minutes before killing her and himself as the Soviets took Berlin. This Hitler is wildly unhinged and desperately suicidal.

Genius struggles to maintain order in the hut, with the younger Hitler trying to come to terms with the fact that he would soon murder his girlfriend and embark upon a massive and failed war, and the older Hitler urgently trying to take his own life with whatever means are available. Inevitably, one or both of them will succeed in killing themselves, and Genius will have to resurrect the next sperm from the relevant sample.

The play begins immediately following Stalin’s death in 1953, when stranger Alexei Stagger stumbles upon the hut, seeking shelter from the frozen woods outside. Although he claims to be a lost miner, Genius soon realises that he is an agent of the recently formed OGPU, the secret police. Stagger has been sent by Stalin’s successor, Kruschev, to shut down Stalin’s secret laboratory. Genius is unfazed, and neutralises Stagger by attaching a piece of paper with a mystic formula written upon it to the back of the agent’s neck. Stagger is instantly transformed into a zombie-like servant, and Genius carries on with his duty of coordinating the game of Go.

The two Hitlers, in the midst of this confrontation, are locked in a serious conflict. The 1931 Hitler desperately seeks to comprehend how he came to end up as the 1945 version, while the older Hitler manages to kill himself by swallowing Go stones. Genius revives a new 1945 Hitler, the younger Hitler edges closer to suicide, and the game of Go continues.  This is Chosei.

This all came together over the course of three and a half weeks, from the first assembly of notes to the first performance.

The whole project was manic. The three of us would meet up in the evening and talk until late at night, in cafes, parks, back gardens, libraries, carparks, usually stoned and drunk (strunk!). Nickamc and I would churn out draft scenes, which usually cancelled each other out or became irrelevant as soon as we gathered to talk again. Within a fortnight of first gathering our short stories together, we had a first draft script and we were into rehearsals.

We rehearsed for ten days. Nickamc directed, Muttley played Alexei Stagger, I played John Genius, Jack Lloyd played the 1945 Hitler and Kim Gorter played the 1931 version. We scrambled madly through the production stage as we attempted to finalise the script, we pushed through every rehearsal despite the play threatening to fall apart at any moment. We couldn’t afford a Go board, so we made one from cardboard and used bronze coins and bits of green glass as the pieces. (Jack as the 1945 Hitler had to swallow a bunch of stones at one point, so we snuck in green lollies as edible stones – leading to the eternal question of when Jack would accidentally swallow a piece of glass and die for real.) Nickamc furiously composed a soundtrack and coordinated a poster, Muttley designed a fold-out collage program, we rigged lights, dragged in a bathtub for a set and in slightly over a week we were on.

No-one came to see the show. Our opening night was cancelled as our two audience members elected to see it another night rather than sit there alone. The other play, Doctor Tarr and Professor Fether, had a much larger cast and Chosei was originally performed for their benefit alone. 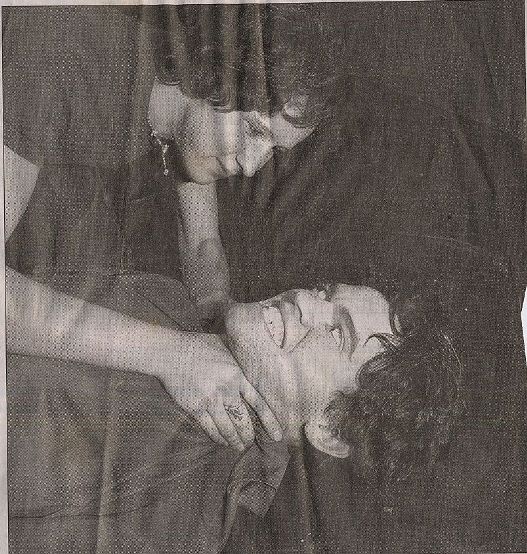 Kim Gorter as Lucky and Jack Lloyd as Hitler in Chosei: Eternal Life (photo from the Canberra Times)

It was deeply disheartening. But at the same time, there was a strange excitement about the work. The few people that saw it weren’t exactly positive, but they were all interested. Canberra Times reviewer Alanna Maclean described it as possessing ‘a kind of earnest lunatic charm’ and said ‘This piece achieves a certain success because it properly takes itself seriously. Although I’m not sure where it goes in the end, it is interesting getting there via bathtubs and injections and the cold Russian winter snow outside.’

It’s a hugely broken piece of work, but nevertheless I’m extremely proud of it. It proved to us (in case it needed proving) that if necessary, we could write and produce a play within a month. The plot and setting was impossibly dense and tangled, but the onstage action was somehow strangely entertaining. Watching Hitler enthusiastically try to murder himself while rocking precariously in a bathtub, or watching the zombified Stagger attempt to obey Genius’ convoluted commands, was somehow comic in a way that we could not have planned for.

From a process point of view, Chosei worked. All the play’s components have been incorporated from one or another of the stories, but they have been so warped in the translation that few people could pick more than a couple. That demonstrated to us the effectiveness of this formula, and of our creative trio (which we subsequently named the Frozen Shape Collective).

The end result is a script which is at or near the top of works from my back catalogue I would like to see re-performed. The script is in no way complete, and any company who took it on would need to be willing to do an amount of workshopping with us, but yet I feel it has the potential to be… to have the potential to… achieve its full potential.