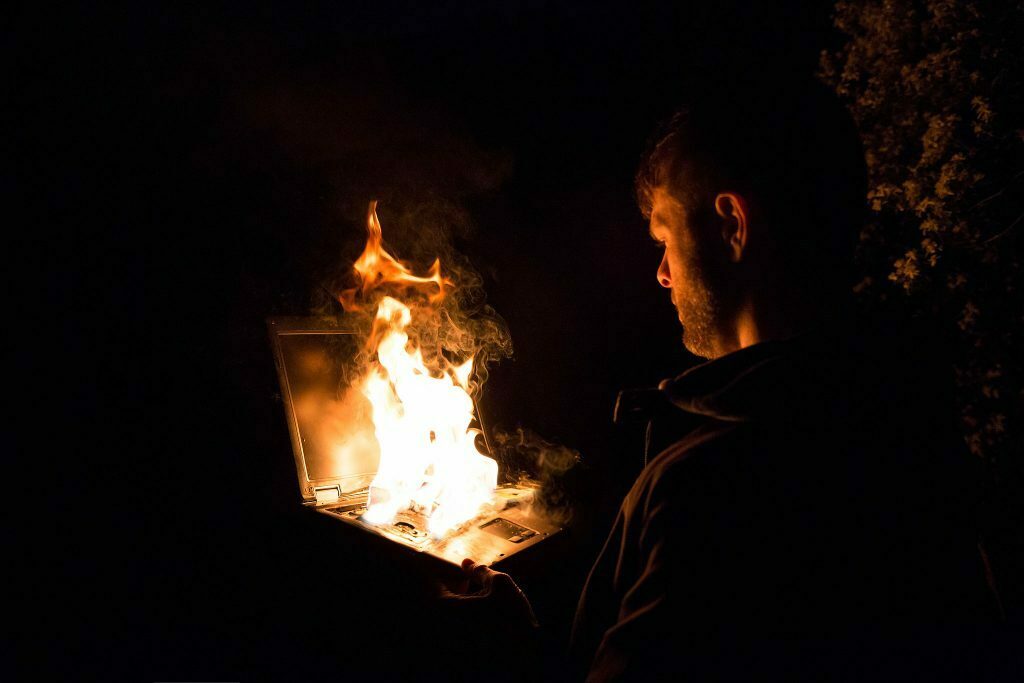 A couple of weeks ago I did a radio interview about Reuben Ingall and my new show You’re Safe Til 2024. The interviewer asked about ‘climate art’ and ‘climate theatre’ in particular – Why isn’t there more climate art? Is theatre particularly well suited to talk about these issues? and so on.

Even as we were talking, it struck me that the term ‘climate art’ is fragmenting and dissolving.

Twenty years ago, when we talked about climate, we tended to describe it as a scientific issue, with environmental and political facets. ‘Climate art’ therefore had connotations of scientists talking about the issues, maybe some speculative future scenarios, possibly some politicians arguing.

In the last few years, there’s a growing awareness that climate change is not a topic of discussion: it’s the backdrop against which all our decisions and plans take place. It’s the paradigm within which every artist and writer on this planet is operating right now.

The world is changing around us. We see it in global warming and the increase in extreme weather events, in the vanishing of insects from our shared habitats, in the ubiquity of plastic pollution everywhere we go. It’s not a distant future possibility – in 2019 it’s visible everywhere and in everything. It’s always in the corner of our eye.

Frankly, it’s too big to be a genre.

And so, more and more, every work of contemporary art becomes ‘climate art’.

In the 19th century, most English writers were, in some way, writing about the Industrial Revolution. The characters in Jane Austen’s novels were operating in the aftermath of the Enclosures, which forced farmers off the land and into the cities. This created the labour supply for factories and mills and resulted in the social milieu that Austen explores. Similarly, Charles Dickens depicted labour conditions and the new urban lifestyle created by the rise in manufacturing.

In the same way, just about every artwork produced in the 21st century can be viewed through the lens of climate change and planetary transformations.

I’m far from the first person to make this observation – James Bradley wrote a great piece several years ago about the same phenomena in the world of literature, in which he quoted Mckenzie Wark’s remark, ‘all fiction is anthropocene fiction, some of it just doesn’t realise it yet.’

What does this mean? Well two immediate consequences:

1. For those writers and artists who are interested in starting to make ‘climate art’: relax – you’re probably already doing it. You don’t need to read a volume of scientific literature or government reports, you don’t need to be qualified, you just need to be writing about the world.

2. For those writers and artists who don’t want to make climate art – too bad, you’re already doing it. If you avoid talking about the climate, your work will be read, in retrospect, as either wilful or oblivious denial. And that’s not a bad thing! There’s nothing wrong with escapism in a time of struggle – don’t ever get suckered into thinking that the only art that matters is ponderous ‘worthy’ nonsense.

So my prediction, then, is that we’ll cease to see collections of ‘climate fiction’ or festivals of ‘climate art’. I predict that in the 2020s we’ll develop a new label for works that reflect directly on the linkages between the environment, society and the economy – but I guarantee you it won’t be ‘climate art’.

POSTSCRIPT: After I’d written a draft of this post, Rebecca shared this quote from David Wallace Well’s Uninhabitable Earth with me: 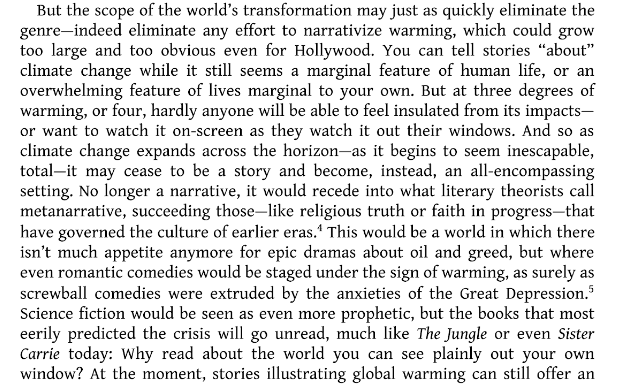 (This is good stuff, but I disagree with Wallace Wells that global warming stories ever offered an ‘escapist pleasure’ – in my lifetime, climate-focused artworks have always sat in the category of Worthy Art; something that people think is important (for some reason) but is always depressing and dull.) 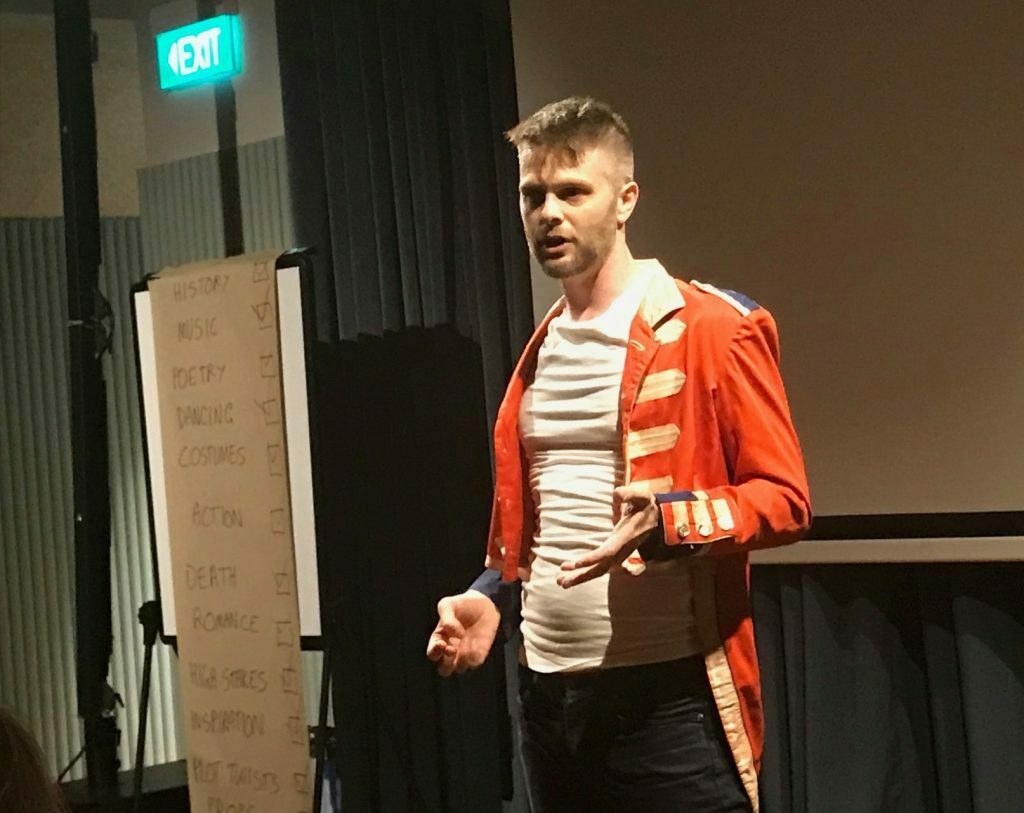 In life and art news, it’s been a super busy patch of time. Reuben Ingall and I presented the first set of shows of You’re Safe Til 2024, our new performance exploring planetary change. This was the first development of what will eventually become an 8-hour work in 2024.

We kicked it off at the Batch Festival at Griffin Theatre in Sydney, followed by shows at Smiths Alternative in Canberra, the Art+Climate=Change Festival at Bunjil Place in Melbourne, and finally, the Straits Clan in Singapore.

I’m doing a small run of shows at Edinburgh Fringe Festival in late August for anyone in the UK – otherwise, have a read of Steve Dow’s lovely Guardian review.

On Monday 17 June I’ll be joining playwright, sustainable finance expert and all-around charismatic genius Ben Yeoh onstage at the Museum of London for our performance lecture Thinking Bigly, which talks about possible solutions to the climate crisis.

Kill Climate Deniers was just onstage in Brisbane for a season at Metro Arts, produced by THAT Production Company – which judging by the reviews (here, here, here), seemed like it was a fucking dope night out.

Finally, in London, the Pleasance’s production of Kill Climate Deniers opens on 4 June, and runs til the 28th. I went to a rehearsal last weekend and it was GREAT – such a joy seeing these guys tear up the script and throw the thing in a whole new direction. Here’s director Nic Connaughton reflecting on how he’s bringing it to the UK stage.