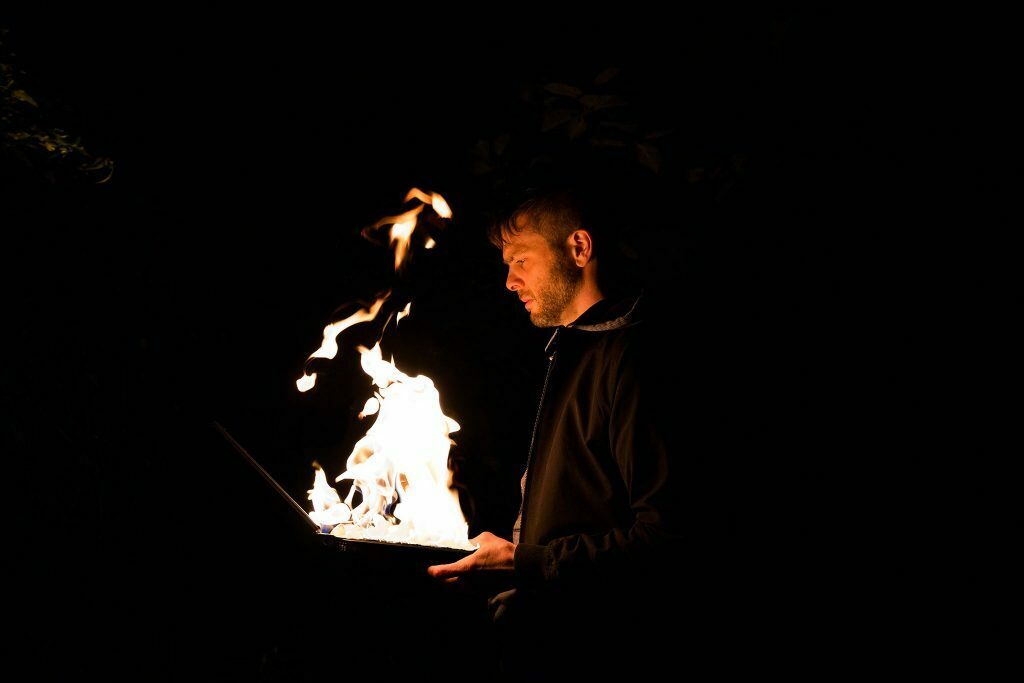 In this blog post I want to share a little history of the You’re Safe Til 2024 project so far. Partly it’s an opportunity to acknowledge the many people who helped create this work, and partly because I think the strange twists and turns of this project are a good example of the strange ways a piece of theatre makes its way into the world.

The background: For years, I’ve wanted to make a piece of theatre that actually presented some of the science of global change. Things like the famous 2009 Planetary Boundaries paper, analysis of society as a complex system, box-and-stick diagrams like the Bretherton model… I’m fascinated by it. But it seems so alien to the sorts of stories that theatre is designed to tell.

I’ve also been dreaming about making an epic show – a durational work, eight hours or more. In my head, the ideas of planetary transformation, global change, need an 8-hour show. Audiences need time to sit with these concepts, and they take a lot to unpack. I’m not talking about an extended science lecture, I’m talking about an event, a form of performance that matches the scale and complexity of the material.

In mid-2018 I had a brainwave: I could use objects as a way to frame this work about global change. What are the unique objects of this moment in history? What can looking at those objects tell us about planetary change? 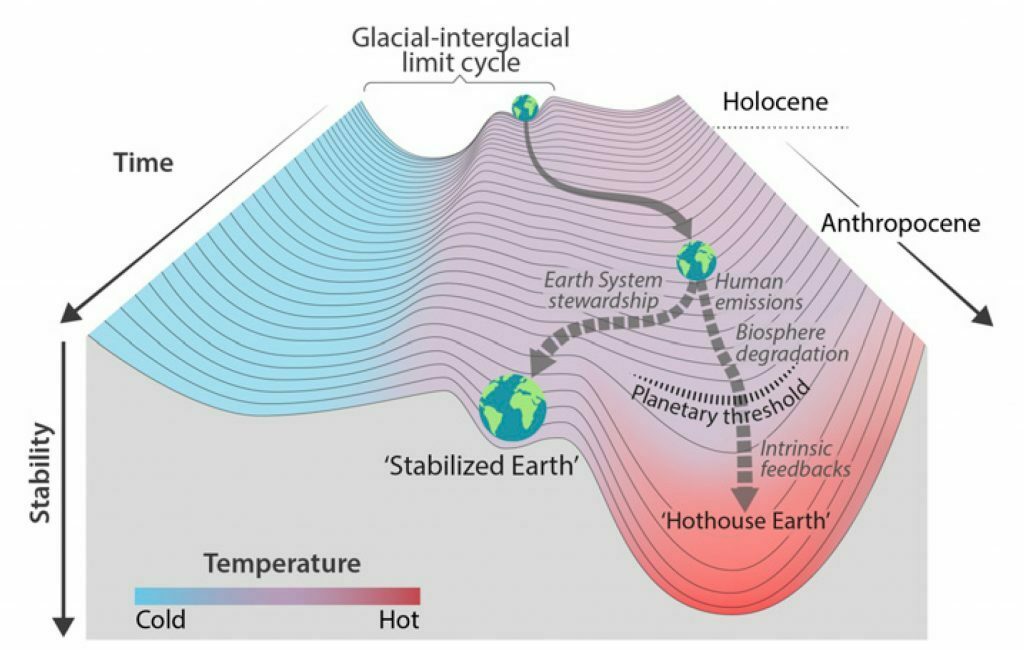 I began interviewing scientists, asking them about planetary transformation: What’s the biggest change happening in the world today? What object might represent that change?

Of course I wasn’t the first to have this idea – there are numerous books, podcasts and exhibitions about ‘anthropocene objects’ – but as far as I could find in my research, no-one had made a theatre show using them before. Performance is a very different artform – I could do and say things with these objects that no-one else could.

I was so excited by this concept, I contacted musician Reuben Ingall and asked if he’d be interested in joining me on this one. Reuben and I had most recently worked together closely on Kill Climate Deniers. He’s a brilliant performer, I couldn’t think of anyone I’d rather be on stage with.

I also approached playwright Chris Thorpe, whose work I’m obsessed with, and asked if he’d be willing to give me some dramaturgical guidance. He kindly agreed. Designer Gary Campbell hosted an early scratch and offered to help make some of the objects I was discussing.

So by November 2018 I had a concept, a bunch of research, and a group of collaborators. I’d decided that the first iteration, in 2018, would be a classic 60 minute show. I’d start there, and then grow it into the huge version over the next few years. I pitched the first version to a couple of places.  I settled in to write a first draft of the script.

And here I ran into problems. Or, to put it bluntly, the whole work fell apart. 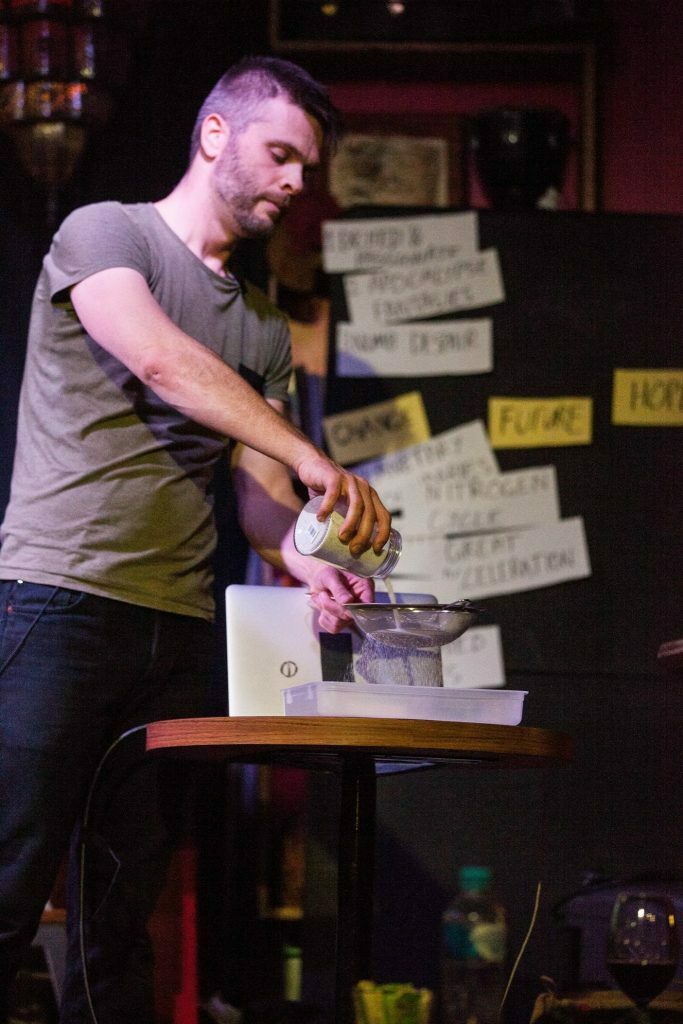 My central idea, which was that I could use a set of anthropocene objects as the spine of the performance, was… not gonna work. A performance is an active three-way relationship between the performer(s), the audience and the subject of the play. There has to be an active process, an experience that happens live in the room, between these three poles, and something has to change as a result.

What I had was a set of static objects, which in and of themselves told fascinating stories about the world, but which had no relationship to me, or to the audience. It might work as a book, a podcast or a museum exhibition – but not a play.

Over the course of two days, what started out seeming like a small crack in the conceit gradually deepened, lengthened, and then the whole work fell to pieces.

Oh well – worse things have happened. I figured, I could start again from scratch. A shame, but so it goes.

But then I got a letter from Griffin Theatre saying they’d agreed to program my work (provisionally titled ‘The First Thousand Objects’) in the Batch Festival, April 2019. Which meant I had four months to build the work from scratch.

I could’ve pulled out, but I didn’t want to. The Griffin audience is too lovely, and the chance to perform on that stage was too tempting. And besides, I like a good tight deadline. So I accepted the offer, sent them a new title (‘You’re Safe Til 2024’) and got back to work.

Over three conversations with Chris Thorpe over November – December, I started to scrape together a new structure. This one was built around an attempt to communicate big ideas of global change. A small scene about an awkward conversation I’d had at a networking event was retooled as the inciting incident for the play. I kept the scripts for Chris Thorpe’s Status and Confirmation open in separate tabs so I could switch to them constantly for inspiration on building a solo show structure.

When I’d pitched the show to Reuben, I’d pitched it as an exploration of different objects – and he was imagining building a soundscape out of those objects. So I tried to keep those elements in place, being aware that Reuben’s time was limited and he wouldn’t be able to remake the soundtrack from scratch.

I shared an early version of the script with Hadley, who picked up on a throwaway line about Hamilton: The Musical and suggested I try to create my own home-brand Hamilton in the show. Hadley’s theatrical instincts are always on point, so I leaned in to that hard and built a whole subplot of the show around my attempt to perform Hamilton despite never having seen it.

Over January – March I wrote and rewrote the script more times than I’ve ever rewritten anything before. I emailed back and forth with Jack Lloyd about ten times, who suggested countless amends and fixes and restructuring devices, and slowly it took shape.

Rebecca and I were in Melbourne for a month in March. In that time I committed to doing four sharings of the work, one a week, to give myself rigorous deadlines. I showed it to Sarah Walker, Max Barker, Tom Doig, Laura Jean Mckay, Jordan Prosser, Michael Greaney and Rebecca Giggs. Marieke Hardy gave me the structure of a Kim Noble show, which I borrowed. Bridget Balodis gave me super sharp notes on the structure and how to end the thing.

I arrived in England at the beginning of April, and carved out a weekend to spend with Annette Mees looking at the work. I presented it once for her, and she straight away went into a line-by-line breakdown of the work with me, finding moments of light and shade, clever repetitions, memorable hooks.

Gary Campbell made me an incredible latex chicken (to represent the weird growth of chickens in the last 70 years) and a facsimile of a goose that had been sliced up by a jet engine (technically known as a ‘snarge’). I spent three days alone in Toynbee Studios drilling lines, learning 60 minutes worth of text by heart.

And then I got back to Australia, had two rehearsals with Reuben, and we headed up to Sydney to perform that same week. And on the Friday night, we kicked off the first show. 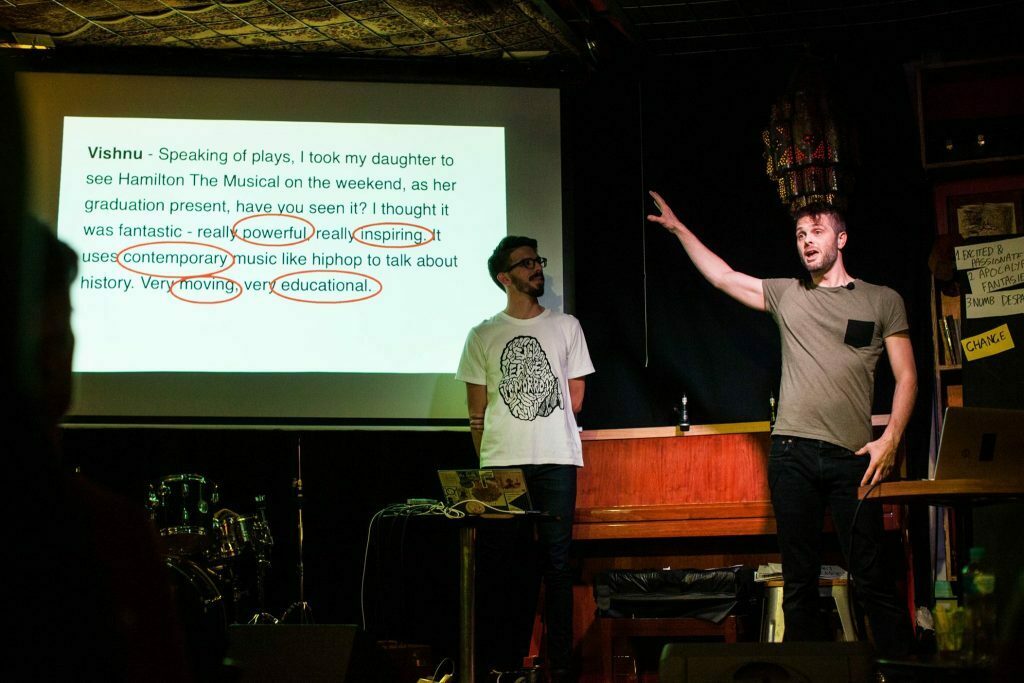 The Griffin shows were lovely – as we left the stage following the first performance, Griffin associate Phil Spencer said, ‘It’s well on the way,’ which felt like a good compliment. The right kind of praise.

So, a burst of shows. A micro-tour. Two performances at Griffin in Sydney, a night at Smiths Alternative in Canberra, then the Art+Climate=Change Festival at Bunjil Place in Melbourne, and a one-off show at the Straits Clan in Singapore. It was a fun micro-tour. Audiences were lovely. We got a nice review.

And I learned a lot about the work, about what doesn’t work and what might be worth pursuing.

What didn’t work, bluntly, was the science lecture. I mean, we could just about get it over the line, we could just about keep the energy up through those bits, but they always felt like work. Work for us, work for the audience. So my grand conjecture, the experiment I’ve wanted to carry out for years, now has an answer: No, you can’t put straight science on stage. Not if you want an audience to crackle with excitement (which I do).

There were things that did work. Being on stage with Reuben is always a joy, and his music was stunning. The scientists’ stories were interesting when they were about the scientists themselves – humanising the science. The final monologue, in which I actively resisted taking responsibility for people’s emotional responses to the issue of climate change, was an interesting and charged moment. 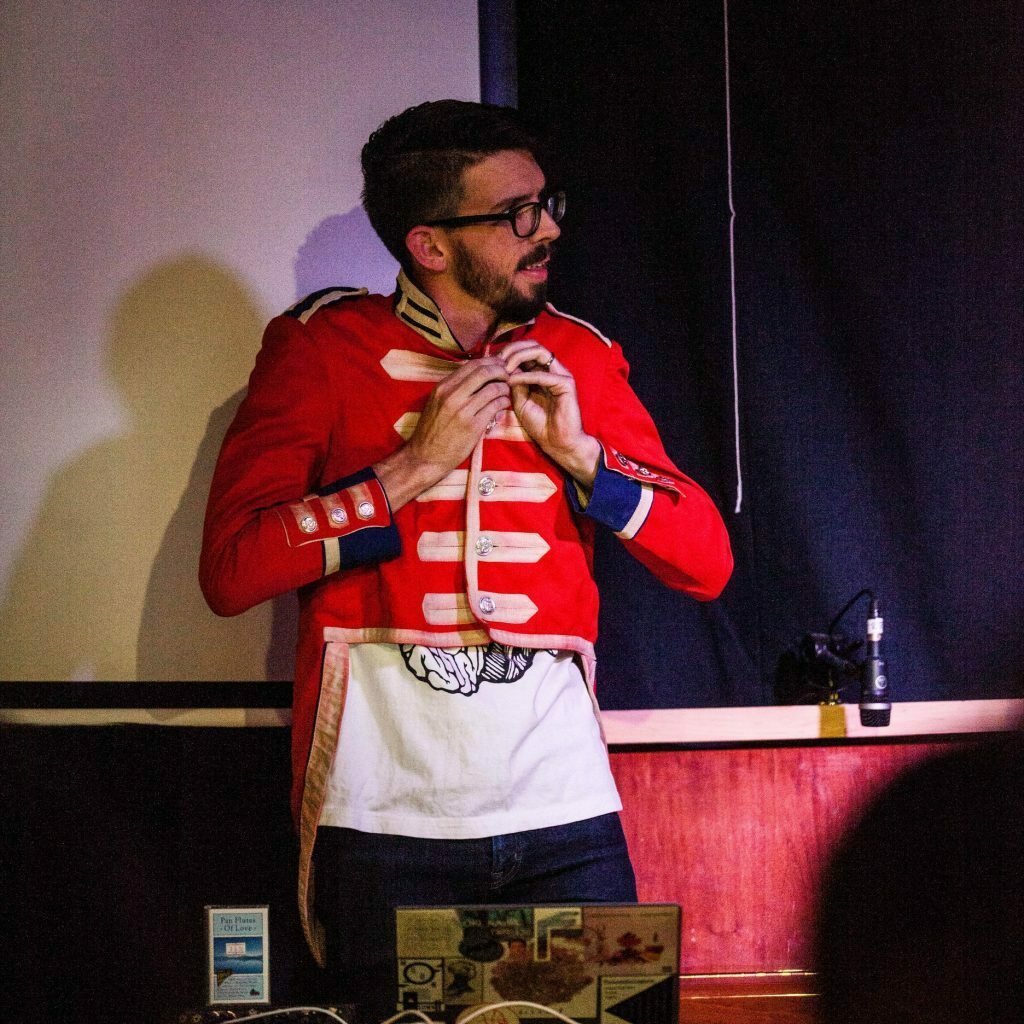 So now, the next step: pull it apart. Having taken a bit of time off, we’re going to return to the work over the next few months and start from scratch, thinking about building the next iteration, the 2020 version.

Over the next five years, we’ll work our way up to the full-blown show. The 2024 version will be an 8-hour epic, a huge spectacle, a wild experience: a novel, a journey, a battle, a prayer, a party.

In the meantime, each year we’ll present a new iteration. Each version will take on a different form, focus on a different aspect of the bigger picture, and gradually, the whole colossal project will take shape. I’m already beginning to glimpse the outlines, and I’m excited.