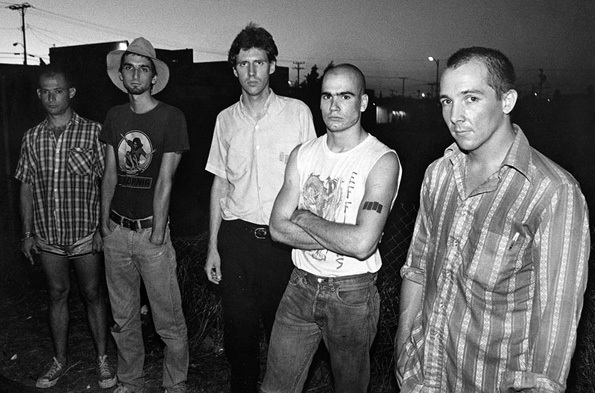 Rereading Michael Azerrad’s Our Band Could Be Your Life, as I do every couple of years, because it’s such a lovely story. He charts out the evolution of the American hardcore underground over the 1980s in a series of beautifully written band profiles. As always, the story of the Minutemen is beautiful and inspiring, but this time what stuck out for me was a line in the chapter about Black Flag: ‘the frustration of toiling in the face of indifference.‘

This struck a chord.

In the world of art, you often hear stories of work that faced opposition – being booed, attacked by critics, censored, banned. We all have stories of being ripped off, let down, burned out, screwed up…

I sometimes get asked if it were hard facing the opposition to Kill Climate Deniers. The answer is: no. Having a chump politician and some pundits gunning for your work is energising. Being told by theatre companies that they like the script, but they’re not going near it because they don’t fancy the fight was honestly some of the better rejections I’ve ever had.

Opposition to your work is easy.* What’s hard is indifference.

In my career to date, the hardest reaction with which I’ve had to contend has been a lengthy, prolonged shrug from the world.

You put in the hours, the months, the years, and yet no-one seems to care. The people who engage with your work seem to enjoy it. There’s nothing obviously wrong with what you’re doing. And yet you don’t seem to be progressing. The world keeps finding new ways to not give a shit about what you make. Your creative life is no different than it was five or ten years ago, except that you’re more tired. And so on.

At least an active opposition gives you something to respond to. There’s friction, there’s hostility, there’s something. Whereas indifference is just nothing. Trying to get energy off indifference is like trying to strike a match on a wet rag.

Active opposition makes for a memorable narrative. It’s much more interesting talking about the poem that gets charged with obscenity, or the play that generates jeers and walk-outs from its audience on opening night.

It’s less interesting to say, ‘I worked for ages on this thing, and then when I shared it no-one really responded to it. It didn’t go anywhere. Nothing happened.’ But man, the second one is a thousand times harder than the first.

How do you get energy off being ignored? What Azerrad says about Black Flag that I love is that they fought indifference. That they responded to indifference by digging in, stubbornly, and saying, ‘you’re all wrong – what we’re doing is important, and the less you care, the harder we’ll fight to prove it.’ They took a kind of perverse pride in being ignored and dismissed – they turned their failure to draw any serious audience into a badge of honour.

I wish I could do the same. The closest I come is that when I get turned down by a theatre company or a funding body or whatever, I promise myself that I’ll do the project anyway, just to spite them. I’ll make something so good that they’ll be sorry and embarrassed they ever doubted me.

Yes, spite is an unhealthy, negative emotion, but maybe it’s better than despair or surrender.

There’s one other Black Flag story in Azerrad’s book that I love. The band drive all the way to Tulsa, Oklahoma for a gig, and only two people show up. The band’s young singer is disappointed, but the bass player sets him straight: ‘There may only be two people in the audience, but they came to see Black Flag.’

I return to that paragraph over and over again like it’s scripture.

* In fairness, I’m talking about the kind of opposition that targets your work, not the kind of opposition that sets out to systematically belittle, oppose and destroy you personally. Structural inequality is a whole other thing, as are the media campaigns which set out to swarm on and harass the vulnerable. (Speaking of which: destroy News Corp.)

It’s mid-January 2020. Spent the first two weeks of the year in a long-distance panic as my home was hit by the worst fires in recorded history, evacuating friends, destroyed homes and devastated ecosystems. Grim start to the decade.

I was due to do a performance of break into the aquarium at Theatre Deli, but instead I cancelled it and replaced it with a new show, created in the space of a week – an iteration of You’re Safe Til 2024 about deep history, the origins of humanity and the unfolding fires. I performed that this Thursday and it went well – well enough that I’d like to find a space to present it again soon. (Get at me if you have any thoughts!)

Also, Ben Yeoh and I did a performance of Thinking Bigly at Deli – my favourite so far. We’re performing it again in late March if yr keen.

I’m heading to Manila in a couple of weeks to run a climate-art workshop with JK Anicoche, and to rehearse Are You Ready To Take The Law Into Your Own Hands with Sipat Lawin. Then we head on to Melbourne to perform the show at Arts House from Wed 26 – Sat 29 Feb: get tickets! Come!

And then I’m back in London in March to launch break into the aquarium at FutureFest on 20 March.

As ever, feel free to get in touch if you have any suggestions that might make my life more interesting. And otherwise: peace!