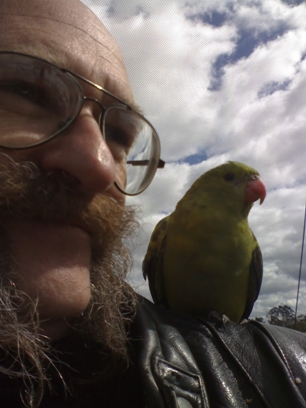 So in July 2008 Jan Wawrzynczak dies, which is to say one of the major figures in my artistic life and a really important friend and mentor. This is not to get bogged down in that, just that the only response I could summon that felt remotely faithful to his memory was to write him something. Jan’s favourite piece of my writing was my Short Stories about Lenin, so in that vein:

These initial collaborations aside, Jan’s first production using an all lichen cast took place along sixteen kilometres of rocky cliffs in the Faroe Islands west of Norway. Working through a variety of translation software and sign language, Jan choreographed more than 1300 square metres of lichen into a complex dance which lasted over seven hours. Viewed from the ground, the performance looked like nothing more than waves of dull-coloured fungi surging slowly over the wet rocks and mud. From a great height, the patterns of dry mould told a different story. For the 96 men and women crammed into the small flotilla of hot-air balloons and micro-zeppelins hovering 400 metres above the cliffs, the flowing and shifting patterns of different lichen species traced out a detailed narrative covering 91 years of literary history. Beginning with a parade of Dickens villains, Jan’s subtle story moved through Film Noir gangsters and the shadowy menaces which populate Absurdist Theatre scripts before a grand finale in which the lichen re-enacted the entire first and second series of Twin Peaks.

Unfortunately by this time it had gotten dark and the balloons had run out of fuel, so the audience had to miss the finale. Upon landing, they were informed that Jan had absconded from the Faroe Islands early that morning – his whereabouts unknown – and that he had stolen the Education Minister’s favourite whale.

Jan vs. The English Royalists

Jan’s cadre of piglets now numbered 14, and many of them had nearly attained their full growth. They were all battle-hardened revolutionaries now – 31 months of near continuous guerilla warfare had seen to that. Even the youngest – the piglet affectionately known as Camera-Camera – had spilled her share of Cavalier blood. They were veterans, every one of them; a crack troop of commandos, disciplined and ready to follow their commander anywhere.

Jan leaned out of the low branches with a pair of binoculars. ‘They’ve fallen for the diversion,’ he murmured to the young pig crouched on the branch next to him, ‘They’re leaving the main road and coming down towards the river.’

The pig whispered the news to his comrades on the same branch, and they passed it on – a hushed oink briefly rustling through the branches, and then silence. On the other side of the shallow river, a detatchment of 30-40 English Dragoons were grumbling indignantly to one another as they cantered along, gesturing to the muddy river bank and their gleaming leather stirrups.

‘When’s the word?’ Camera-Camera murmured softly to Jan as the troops trotted closer and closer to their hiding place. ‘What’s the word?’

In one startlingly cohesive movement, 14 young pigs leapt out of the trees, unfurling their camouflaged hang-gliders as they jumped. To the English cavalrymen, it looked as if the trees across the river had simply exploded, spraying a payload of high-speed pigs gliding towards them and firing round after round from their modified timber Derringers.

Jan is not bad at card-games

Curlworth and his two cronies looked crookedly at Jan over the low card-table, their beady eyes staring at his cards as if they hoped to figure out his hand with X-Ray vision. Brantworth shrugged, dropped his three cards carelessly; ‘Ace and a nine,’ he grunted. Stabworth followed him; ‘Pair fours,’ he said. Jan said nothing, and Curlworth sneered victoriously. ‘Pair nines!’ he grinned cruelly, ‘And a Jack on the side. What’s it gonna be, Wawrzynczak, me old chum – are we gonna take your toes first, or your ears?’ Brantworth and Stabworth laughed uproariously, and the three thugs clambered to their feet, reaching in hidden holsters for their weapons.

Jan’s eyes flicked from face to face, thinking rapidly. He had just constructed the bare rudiments of a plan, however, when a torpado flashed past them, missing the submarine by less than a metre, and detonated before travelling another fifteen metres. The submarine lurched sideways and threw the men into the wall, while the shrieking sonar announced that a second torpedo was on the way, followed by at least fifty more! Jan attempted to stand upright, only to find his hands and feet transforming into reptilian claws, scales glimmering with a lizardlike sheen. The gypsy woman’s Shapeshifting curse had struck again, at the worst possible moment! As his face lengthened into a crocodilian snout, Jan’s phone buzzed with a gentle, innocent ringtone. Jan looked at the caller ID and yelped – of course, his niece’s wedding started 40 seconds ago, and he was supposed to be giving away the bride! His sinuses flooding with guilt, Jan turned in time to see the locks of the specimen cages click open and eight experimental Military War-Dogs burst free, each equipped with four side-mounted Laser Harpoons and a reel of Boomerang Grenades, jacked up on testosterone growth hormones and a lifetime of cruel treatment. Snarling and spraying laser-fire, they charged down the corridor towards him, even as the earthquake finally split the ocean floor below. Jan could hear the wicked Sea God cackle through the briny depths as a sheet of lava 50 metres wide and 35 kilometres long sliced upwards towards his tiny craft at hundreds of metres per second.

Without the slightest hesitation, Jan’s hands flashed through a pattern of gestures, signing a rapid command in Ancient Earth-Tongue, the language used by the planets themselves when they talk amongst each other. As his clawed finger carved the sentence’s final arc, the ocean below the submarine froze instantly, hardening into an icy shell which the Sea God’s lava smashed harmlessly against, and Jan tumbled effortlessly into a cartwheel, spinning towards the escaped canine experiments with a carefree grace. As the leader of the pack leapt towards him, lasers spraying and electrified teeth crackling blue sparks, Jan brought his right elbow down on the dog’s skull and his left hand up into the dog’s vulnerable belly. In the quarter-second of elbow-strike induced dizziness, Jan sought and found all the dog’s favourite places to be scratched and rubbed on his belly. As the remaining seven lurched towards him, ready to strike, they instinctively recognised the transaction that had taken place and bowed their heads to Jan, the new Leader of the Pack. Jan acknowledged his new troop of followers with an honest smile and seven swift belly-scratches, all the while wildly pressing buttons on a remote control he had hidden in a shoulder holster. The moment the activation sequence was keyed in, a robot clone halfway across the world snapped into life, slapping a handlebar moustache across its face as it jetpacked towards a wedding service some 60 kilometres away. The robot touched down outside the church the exact second the limousine pulled up. Opening the door, the Jan-Bot offered the blushing bride its elbow, giving her a wink and activating a loudspeaker in its mouth connected to Jan’s mobile phone. Jan laconically murmured a  collection of witticisms and home-truths perfectly suited to put his niece at ease and make this the happiest day of her life into the phone, while scribbling at white-hot speed a set of equations and magical formulae on the tunnel wall with a permanent marker. Slicing his kneecap with a recently received Eftpos card, Jan splashed a few drops of blood on to the grafitted runes, and the spell was complete! As his crocodile jaws retracted into the famous Jan jawline and his skittering claws softened into smooth human flesh, Jan grabbed the sonar screen with both hands and fly-kicked the steering panel. This bold, unexpected move sent the submarine into an unpredictable series of loops and spins, while the barrage of torpedoes sailed harmlessly past on all sides, carving charming trails of bubbles in the cool blue waters.

Turning back to the card table, now scattered in shards across the length of the submarine, where Curlworth, Brantworth and Stabworth clung desperately to whatever surface they could grip, Jan knelt down and retrieved his cards – still lying face down, exactly where he had placed them. Looking over three pairs of terrified eyes, Jan turned them over one by one: ‘A nine. A nine. And a King. Curlworth, you and your boys owe me a new air-conditioner. I want it installed in my office by Tuesday, dig?’

Curlworth’s voice drifted up softly from some deep well of terror: ‘…I dig.’

to heat you up and cool you down Ile and Moondirt