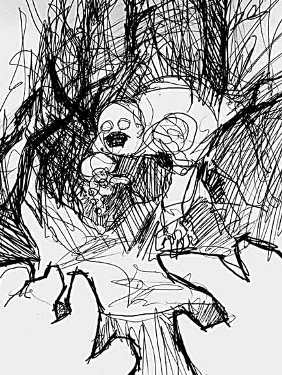 A collection of short sketches based around a break-up. I mostly scratched these in May 2007, while I was on the road driving around regional South Australia with actor Chrissie Shaw, touring a kid’s show (Flotsam & Jetsam) for Jigsaw Theatre Company and the Come Out Festival. There’s a few fragments (TV Guides, gift cards from craft shops) that give away the origins of these pieces, but mostly you can pick it because of what was on my headphones throughout the month.

Ali McGregor and Max Barker performed one of these pieces: (jackie-o motherfucker) as part of A La Mad Nix, their CYT Open House residency in the C-Block Theatre, June 2007. Much respect to them for making it look better than it probably was.

a silver mt zion – 13 angels standing guard round the head of your bed
Kiss my mouth. They said we couldn’t do two weeks. Another one. My mouth.

jim o’rourke – halfway
I think you got the wrong idea.

smashing pumpkins – eye
I’m not enjoying it. I don’t like it.

eats tapes
it doesn’t take a rolls royce to figure that one out, does it?

wormsign
She didn’t ask. I didn’t know what she wanted me to tell her.

amos milburne – nobody’s fault but mine
After that melodramatic note, how could I not?

brothersister – hum
fucked her up worse.

hello mr sky. hello hey man.
Or what were we even together for?

error loading xml document
Was there someone there when you most needed someone?

kid 606 – sugarcoated
Your Guardian Angel has to report to YOU-KNOW-WHO!

this before but also that
I just, I’m disappointed in the zoo and aquarium.

DJ Olive – take it to the corner
A silent but deadly psychological war is waged behind Sarah’s back. The potential for explosive violence is at every corner. G. Mild Themes.