A pic that Jordan took while we were in Munich. This captures my headspace well rn. Pic by Mr J Prosser.

Crowded London headspace. What’s the word for it, that feeling where your mind’s just an open deck of cards being shuffled by the city, and you do your best thinking with your eyes kept low to the ground and the horizon’s always just a few centimetres away or there’s no horizon at all, everything’s just always spinning into the fog?

It hasn’t been as busy or intense as it could be / has been / will be, but you know the sensation of casting your mind back to recall what you’ve been doing all month, and all you can see is waves breaking over pebbles.

It’s August 2018. Here’s my interesting challenge of the moment: How do I prioritise and drive my work forward without a specific pressing deadline or any particular momentum around a project?

Now that CrimeForce is done, and Kill Climate Deniers has receded well into the background, I’ve got a bundle of projects at various early stages. And this is exciting! In a way. These projects could become anything, there’s no limits on them, my imagination is the only constraint, I can dream big, I can make them into whatever I choose, etc etc.

Of course, it doesn’t feel like that. What it feels like is that there’s no energy around the work – no-one’s asking for them, no-one’s clamouring to read these scripts or jockeying for the right to present these shows, and so it’s hard to believe in them myself.

I suspect the reality is somewhere in between. There are people who might care about these works, there are contexts that might suit them, if I really threw myself at the task of connecting with those people. But that’s not the priority: what really matters right now is finding the energy to make these works good – or even to make them exist.

Because my entire creative and professional life is based around projects, and because of the jagged and varied nature of those projects, my calendar and schedule is always all over the place. When I’m in delivery mode for a script, or a game, or a show, it’s hectic and demanding and swallows up all my energy and thinking. When I emerge from the other side, I then have to figure out what I’m doing with myself, and how best to shape my time.

I think of myself as continually returning to square one. Every few weeks, it feels like, I have to go back to the basics and figure out what I want, and how to go about getting it. In some ways that’s great – it means I never, ever get caught in a rut. (Sometimes I fantasise about how nice a rut sounds, the sheer delight of getting bored.) I’m always going back to first principles, recalibrating myself and starting again.

After 18 years of this, you’d think I’d be better at it – but it’s always a jolt to find myself with an empty tasklist, unsure about what to do next, what’s most important and where to begin.

New projects never fare well in that mix. I find myself tinkering with the existing projects, where the jobs are simpler and more clearly defined, rather than diving in to grapple with the vague, ill-defined jobs at the beginning of something new. An item like ‘Check Kill Climate Deniers website is compatible with new Google search crawlers’ is clear, defined and easy to tackle. An item like ‘Figure out Reincarnation Play’… what even does that entail?

New projects are vague and loose ideas, to begin with. In order to condense into something more meaningful and structured, they need time spent on them just thinking. And ‘sit and think’ is always gonna be less urgent than other tasks, which  means that new projects run the risk of never getting past the vague idea stage.

The same goes for ‘write new draft’, ‘research origins of patriarchy’, ‘type up notes from late night dancefloor’ and so on. And the upshot is that new projects don’t get created – or at least, they take far longer than they should to get to the stage of being tested, put on the floor, scripted and/or pitched.

This is where, for performing artists, festivals come in super handy. Any festival – from the sleaziest, cheapest fringe festival on up – provides you with a place and a time by which you need to have manifested an idea into something.

But right now I’m trying to do better, just by myself. I’ve got some ideas that I’m trying to condense into actual work, like those fog farms in Chile condense mist into drinking water. And no-one cares whether these new ideas happen or not, or whether they happen by any particular date. But like Sarah Walker said, ‘self-imposed deadlines are the most satisfying to hit’. 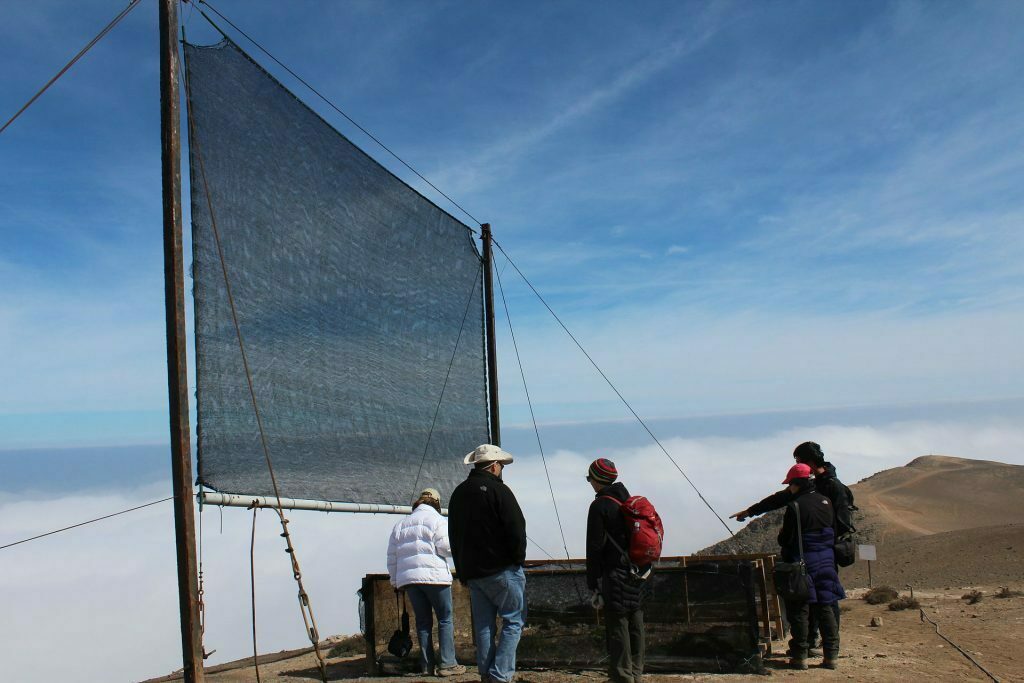 So this is the deal. I have two new playscripts – 44 Sex Acts In One Week and End Science Now – both of them dope as hell, and I’m breaking the Glyn Roberts rule and working on them myself, without any company attached. Fuckit. When I’m done they’ll be the best things I’ve ever written.

I’ve got two new schemes for performances to present: one a solo piece which I’m calling, for now, The First Thousand Objects. I’m gonna scratch 10 minutes at Camden Peoples Theatre at the beginning of October, but the performance date isn’t the most important deadline for me – the real achievement will be tying off a bunch of research and completing some interviews for it.

The other piece sits in a conversation with Ness Roque, and that’s a whole other performance form which I need to learn more about before diving in: learning about a performance form is a deadline in itself.

And I’m chewing through a new thread of text to go into the next Sex Play development with Anthea and Sarah. I know that whatever I end up producing probably won’t end up in the final show itself, but trying to navigate the complex threads of this topic in written form is the best challenge and is teaching me a lot.

But of course just doing the writing and the making isn’t enough – it never is. There are problems to be solved about navigating the systems of production to give your work an outlet, and those problems demand as much creativity and inspiration as any of the other parts. I’ve got some thinking to do there too. But right now, the goal is just to make.

Things don’t want to become good. Draft scripts like being bad, they seem to enjoy it. Ideas are happy to not take concrete shape. Nothing interesting wants to exist. So, I think, we’re wrestling with ghosts.

Which is a strange profession to be in.

I was in Munich with Bec in June, working mostly on CrimeForce: LoveTeam, but with a little bit of new writing in amongst it. Jordan came for the last week, and we finished making that show, writing, rehearsing. Then to London, Nickamc joined us, and we hammered out a week of hard rehearsals before FutureFest at the beginning of July. 6 shows in 2 days on a hot weekend at Tobacco Dock, we got to know CrimeForce very well, and it was good, it was good. 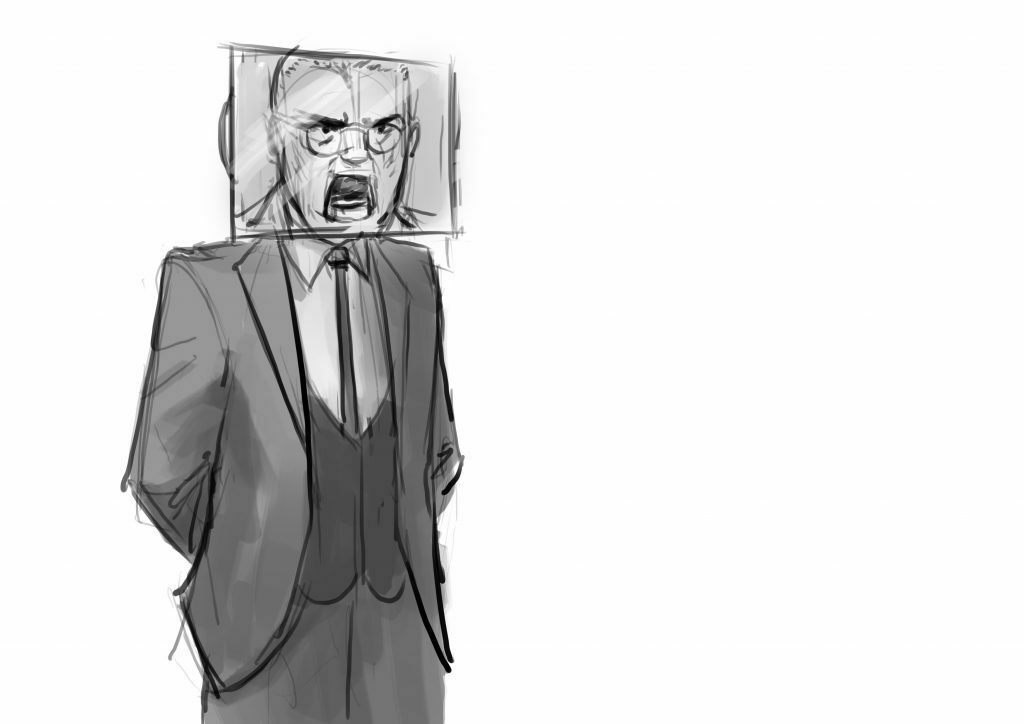 And in the midst of that process, Jordan and I recorded a little spoken word recording – a Munich EP! – to be released very soon. Little bright stories in the green German summer, with some new Fossil Rabbit songs accompanying them.

Then it was dropping back into Coney stuff. My official day-job, as much as I do anything that you could describe that way, picking up pace rapidly. A hectic month, and that’s not slowing down any time soon. My proudest achievement there was a systems map of the world of job automation – always satisfying to drill down into a bundle of research and turn it into a gameable schematic.

But in amongst that, I was able to finish a new draft of 44 Sex Acts. Which has made me inordinately happy, because as ridiculous as this script is, it now has some scenes, some images, some exchanges in it that I’m really happy about. I’m still not great at writing characters, which is something you really need in order to make a romantic comedy work, but we’ll get there.

And lastly, I ran a workshop at Arte Urbana’s scriptwriting village in Bozhentsi, Bulgaria. A lovely few days in the Eastern European mountains outside of Sofia, with a lovely group of mentors and practitioners. But my workshop! I guess I overthought it, went through three different drafts of what I’d do with my three hours, and in the end it was… somewhere in between lecture and workshop, and not quite satisfying enough as either. 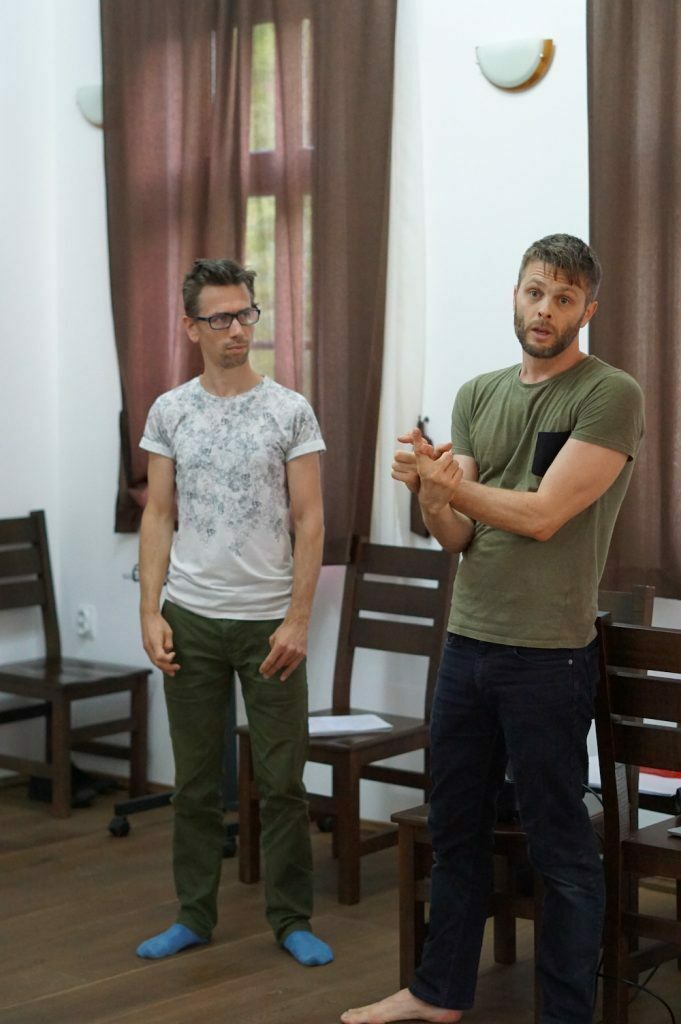 Me chatting in Bozhentsi, while Daniel Bye looks on. Pic by Dimitar Uzunov.

It’s an interesting skill, teaching. You can be a good maker and not know how to teach (I hope), and you can be a good teacher and a terrible maker (I believe). How much do the two correlate? What do students need? How do you give them enough to guide and provoke them without overwhelming them?

I’d like to be a better teacher, whatever that entails. I’d like to be able to condense the little tricks and tips I’ve learned along the way into something I can communicate more clearly. But that’s another challenge, another project, another arc. Either way, on this occasion I think I learned more from the students than I gave them. Maybe it’s always this way. 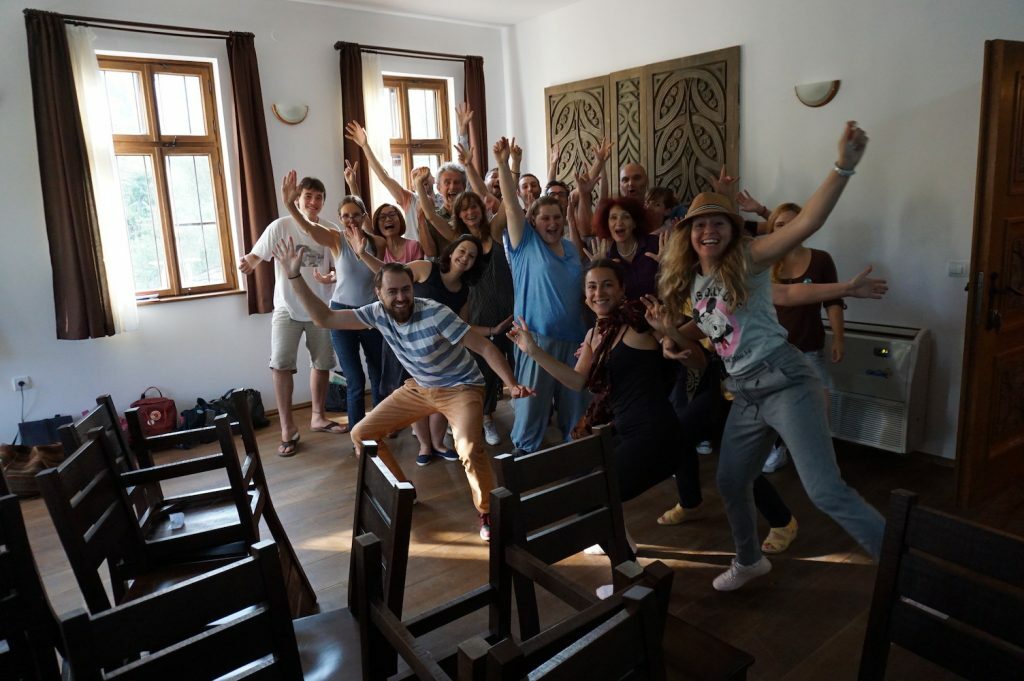 Workshop participants smashing out their fourth press conference in a game of Press Conference Every Minute. Pic by Dimitar Uzunov.

In the future, everyone will murder a boy band member. The pleasure of bad reviews