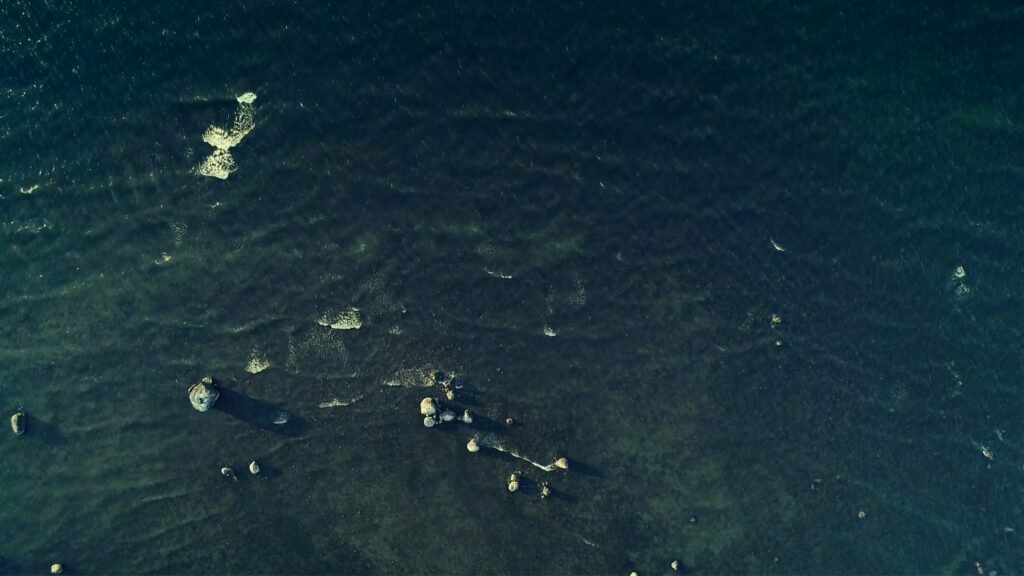 Noticing all the tiny hollows and tucked away spaces where rough sleepers live – the hole punched in the fence near Aldgate East station, you can just see a little grassy crawlspace where people gather on late nights.

Yesterday it was springtime Sunday, people were out strolling, glammed up summer dresses, with nowhere to go.

Today, walked up from the office to Shoreditch along Commercial Street, past the Spitalfield Markets. All empty, all silent. I’ve never seen this part of London so deserted. But with the sun out and a cool breeze, it felt like it’s all stored up, all this energy, the city ready to jump into life the second it’s given permission.

The helicopters taking off and landing on the Royal London Hospital on Whitechapel High Street, the moment of worry when everyone looks up, bright afternoon sunlight, red helicopter settling on the landing pad, someone else’s emergency.

Today I got a takeaway coffee from a little hole-in-wall cafe on Commercial Street. Young barista from Melbourne, told me he took a trip to Canberra once in Year 6, he’s just glad he’s not back in Australia during this. I feel that too, I don’t know why.

First espresso coffee in nearly 6 weeks, I felt a buzz in my stomach like a good pill coming on at midnight in a packed club. 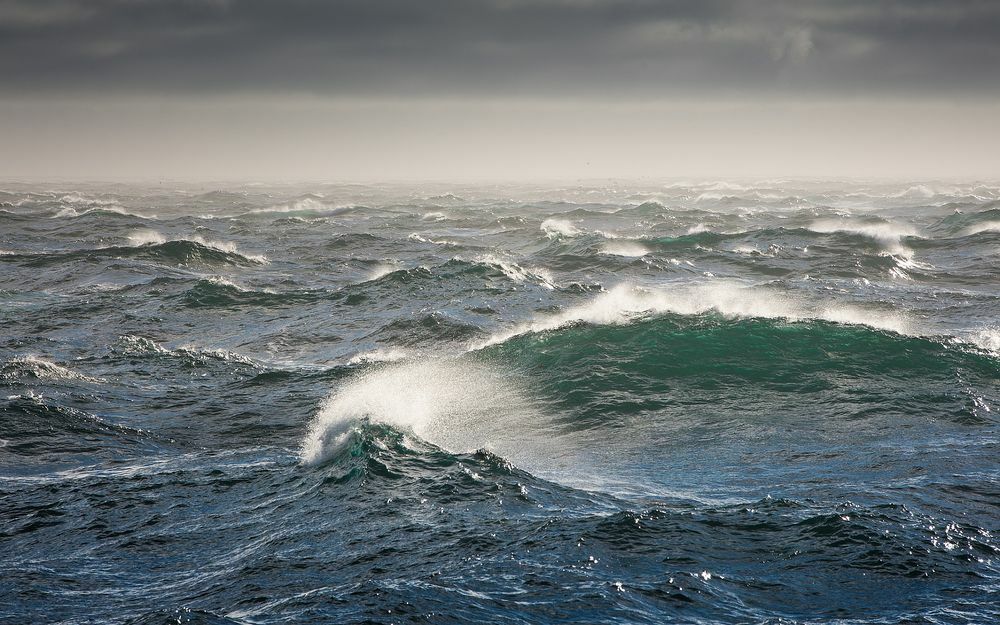 Some kids hustling for business outside the ASDA offered me weed, gave me a playing card with a phone number on it. How are the drug dealers going amidst all this?

Things I thought were strange a month ago that have now become normalised:

– Silent streets
– Queues to get in supermarkets
– Masks – to begin with they felt like overkill to me, but now it feels like wearing masks is just the good, upstanding citizen thing to do

My hands have never been this clean. My skin is so dry.

This week Australian news is all about the contact tracing app, which has just been released. Debates around privacy etc. Here in the UK the numbers of new infections have just started to dip below 5,000 a day, which means we’re a long, long way from being able to loosen lockdown.

This weekend, reading about new reports from the US, Covid causing surprise strokes in young people. Clotting the blood like crazy. The virus is so far from what we thought it was two months ago, or a month ago.

On the way home from work, about 15 delivery drivers standing outside KFC, like they were about to rush the doors. Has KFC just reopened? What is that?

The street market outside Whitechapel Station had closed up by the time I was walking home, one stall had dropped a load of coriander and the concrete had been sprayed, so I walked through green coriander stuck to the wet stone, like seaweed in rockpools. 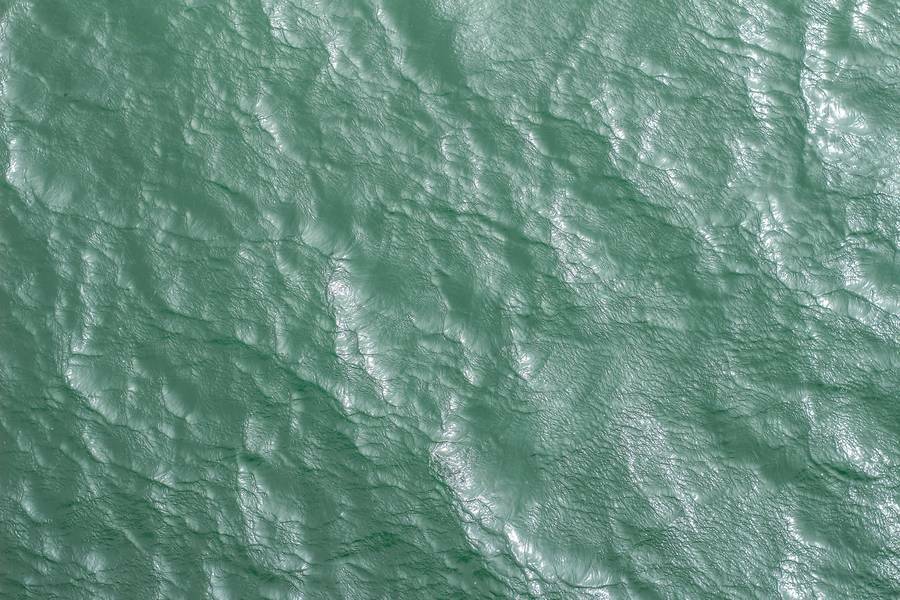 36 days into lockdown. Wuhan opened up this week after 76 days, so, not quite halfway according to that measure.

The KFC has shifted to delivery only. It’s crowded outside with delivery drivers waiting on bikes, showing their phones with order numbers up to the glass, ready to be handed bags of food.

On a bus, an ad for ‘Dr Doolittle’ starring Robert Downey Jr, opening in cinemas on Feb 7. Must have been printed on the bus back in January, after 3 months of weather, Downey Jr’s face is pale and haggard, I relate.

Today, two days in a row, the new cases rate has jumped back over 6,000/day in the UK. Trying not to be disheartened. R=1 or very close to, I guess. A reminder to try and take this stuff week by week rather than day by day.

As I walk from Mile End to Aldgate and back every day, I’ve realised that more and more I feel like I’m underwater – like I’m walking through an underwater canyon with the buildings like rocky seamounts on either side that just break the surface. Swimming along the seafloor with all the other fish, watching cars like big sharks race by on the road. I realise I’m deep down and I don’t expect to come up to the surface again until this is all over, which means, perhaps, never. And it’s quiet underwater, or rather, what you hear is mostly the sound of your own breath.

Walked up through Shoreditch briefly this afternoon. Warm day. Couples out dressed up fancy showing off skin in Brick Lane, standing outside closed restaurants. Someone has sprayed masks over the faces on all the popstars in gig posters around Shoreditch lane, and stencilled MASK UP everywhere.

The UK is talking about relaxing lockdown restrictions so that people can gather outdoors. The numbers haven’t gone down at all, it was more than 6,000 new cases on Thursday. It feels desperate, unplanned.

Arts Admin has installed what looks like a black go-pro clamped to a stripper’s pole in reception, but I hope it’s a body temperature cam. Exciting futures! 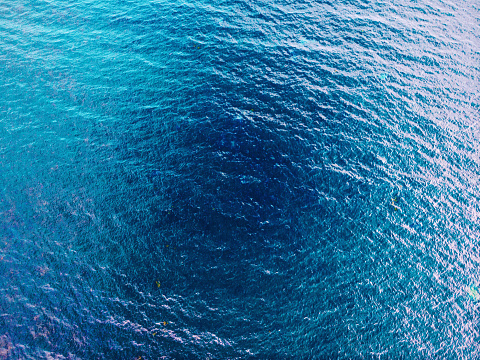 guys if I had to roll through several decades of political disintegration, inept authoritarianism, social collapse and escalating climate impacts before we finally turn ourselves around as a species and start to face the greatest threat we’ve ever known, there’s no-one I’d rather do it with.

In my next life I’ll wake up in the thick of the first real wave of global collapse amidst escalating heat, heat, heat like I’ve never known in this whole life, and yet I’m still going to spend my whole life in love, telling stories, fighting you and your rich friends, we’re going to win, not in this lifetime and not in the next, but we’re going to win

This A4 printout taped to lamp-posts around Mile End Station:

GET AT ME
reg@greedycow.com
stay safe’

Reg seems like the kind of guy who could sort you out with whatever you needed, if you needed it.

Feeling a general sense of benign goodwill towards the world.

I’m choosing to use this as the line between part one and part two of the pandemic. Emerging into part two, this is the next phase, this is the forward push. Not clambering back out of the hole, no, but feeling like I have the strength to continue on through whatever happens next.

Dominic Cummings is all over the news today for his breaking the quarantine, his unrepetant attitude, he is truly much loathed.

The thing that is going to make me crack, and really finally lose it at the pandemic, is that there is a screw loose in my laptop, after I took it to get the battery changed back in February. The guy at the Apple store didn’t screw them back in properly, and it’s the smallest thing in the world, I could easily swing by there and have them fix it up – only then they closed down, and the world closed down, and when I ordered a replacement screwdriver the size was wrong, and so I’ve been retightening the screw with a butterknife every couple of days, and it is slowly sending me insane. 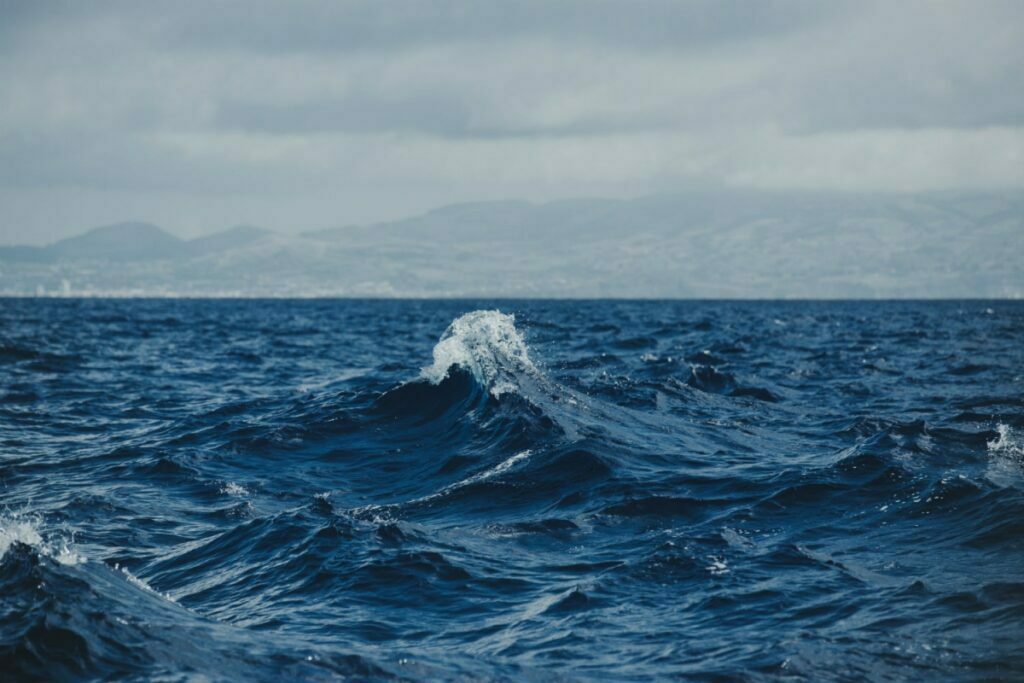 One of the big questions on the Superforecasting website is: will the Hajj happen this year? Surely it can’t, surely it can’t – and surely that’s another first-in-history event.

This week, the WHO put out a press release reminding people that there might be no vaccine. There may never be a vaccine. We don’t get one just because we want one.

In the US, riots in several cities after a police officer murdered a man by kneeling on his neck, for seven minutes, in broad daylight, on camera. The bleakest thing is that there’ll be big infection spikes a week from now in Atlanta, LA, Minneapolis – and yet I don’t blame them in the slightest.

Trump is bickering with Twitter, possibly happy to have the attention taken off the US deathtoll, which just passed 100,000. The US has just pulled out of supporting the WHO. China has just imposed a new national security law on Hong Kong which will make any kind of protest illegal. Xi Jinping gave a speech saying that China’s strategy to dealing with poverty, pollution and potential financial collapse is “to rally more closely around the party central committee with Comrade Xi Jinping at its core, uphold socialism with Chinese characteristics, and follow the guidance of Xi Jinping Thought on Socialism with Chinese Characteristics for a New Era, and realise the Chinese Dream of national rejuvenation.”

Interesting that even as the strongman authoritarian rulers arc up, real power feels less and less centralised. 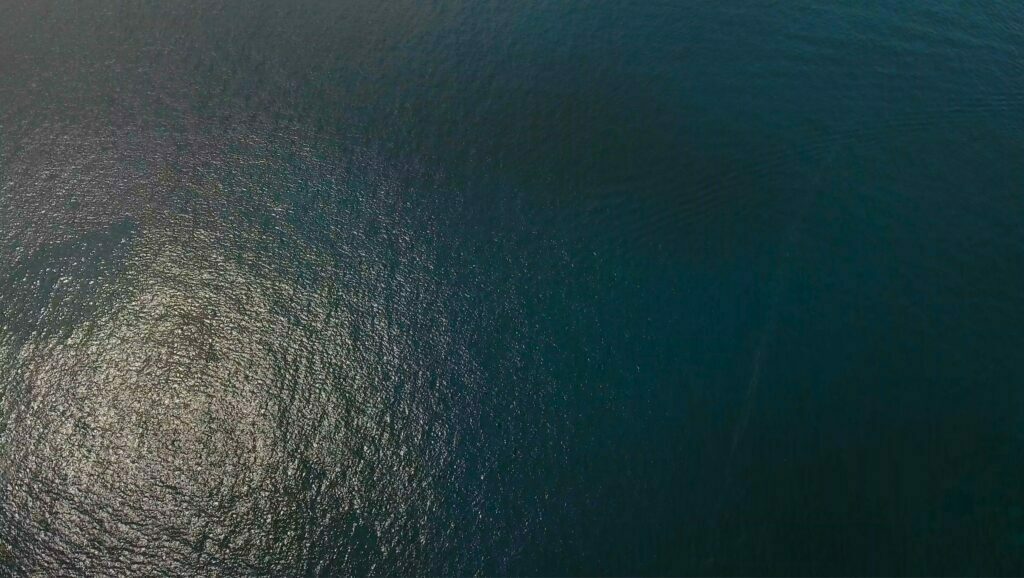 The walk home tonight from Aldgate to Mile End. The little enclosed community near Stepney Green has fabric tied to the gates to spell out HOPE. They left some free books on the pavement this morning with a sign that said ‘Read Don’t Scroll’, but now the books are gone and the sign remains, a weird command but that’s fine. Past Genesis Cinema, the homeless young guy who paces back and forth here each morning is sitting on a park bench with a full bag of grapes, opening it with a big grin on his face. The cinema marquee reads ‘If you’re looking down you’ll miss the rainbows – Charlie Chaplin’. They’ve fixed the spelling on the sign since yesterday, which is a shame, I preferred it slightly off-kilter.

This is where the future started, for me, on this walk up and down a street in London, in the spring, as I gradually learned to stop expecting. 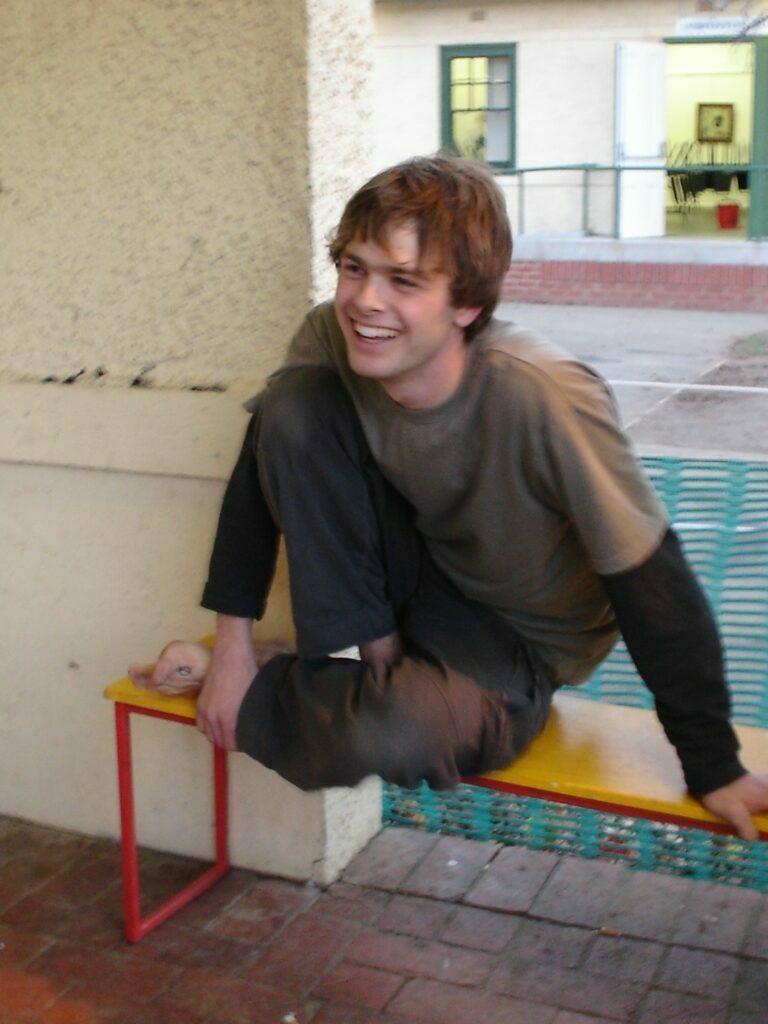 A pic from 2004, outside C-Block Theatre, Gorman House, during rehearsals for Vampire Play. Because why not. Pic by Nickamc.

Like for a lot of people, this last couple of months has been very much about keeping my head down, getting work done when I can, and trying to cover the shortfalls in my financial situation. Theatre has taken a real hit, there’s no question – I feel for every theatre venue, theatre company, and every freelance artist, myself included.

But in the midst of all that, there’s been some work and some writing. I had a couple of lovely readings of 44 Sex Acts, with thanks to some beautiful humans who jumped in and read parts for me and gave me extremely good advice and input. I got to hear the new Hadley script out loud, which was a mad blessing. I’ve spent some time ruminating on the last decade’s worth of projects, and trying to sift through them to see what lessons I’ve learned and what skills I may have developed. And trying to figure out how to navigate the chaos of the next few years, without surrendering my practice. You know how it goes.

But now, I’m excited to say, there is a performance to announce! Jordan Prosser and I are going to do three online performances of our show CrimeForce: LoveTeam, our choose-your-own-future sci-fi cop drama about the murder of a boy band member in the year 2050. We’re doing two shows for Australian audiences (Wed 17 and Thurs 18 June) and one for UK audiences (Fri 19 June). Head here for more info, and to sign up. 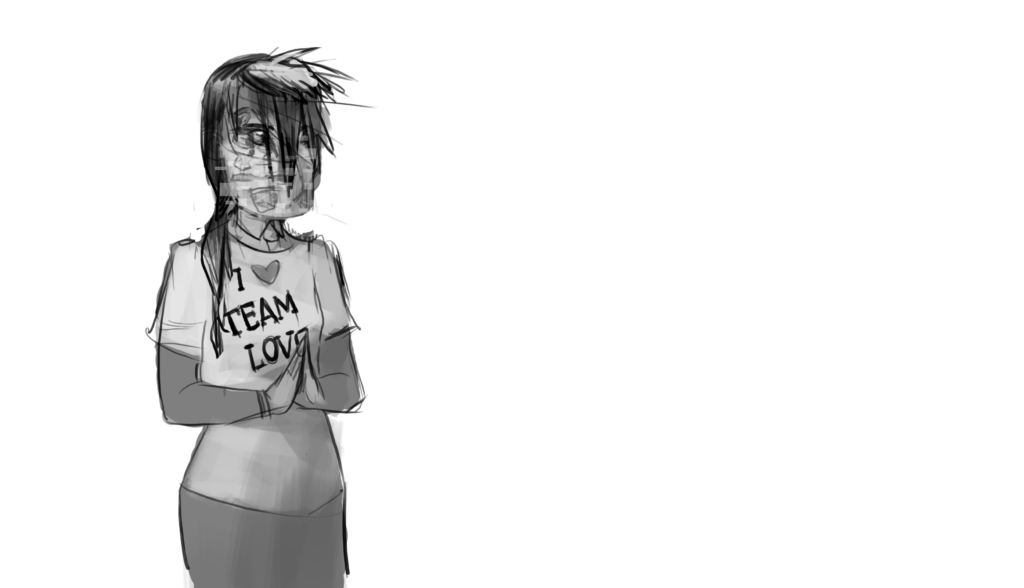 A character from CrimeForce: LoveTeam. Image by Sacha Bryning

And lastly, Rebecca’s book Fathoms is out in the world – well, out in Australia at least (the US edition comes out in August and the UK in November) – and according to Tim Flannery, it’s a masterpiece. Grab a copy, be kind to yourself.