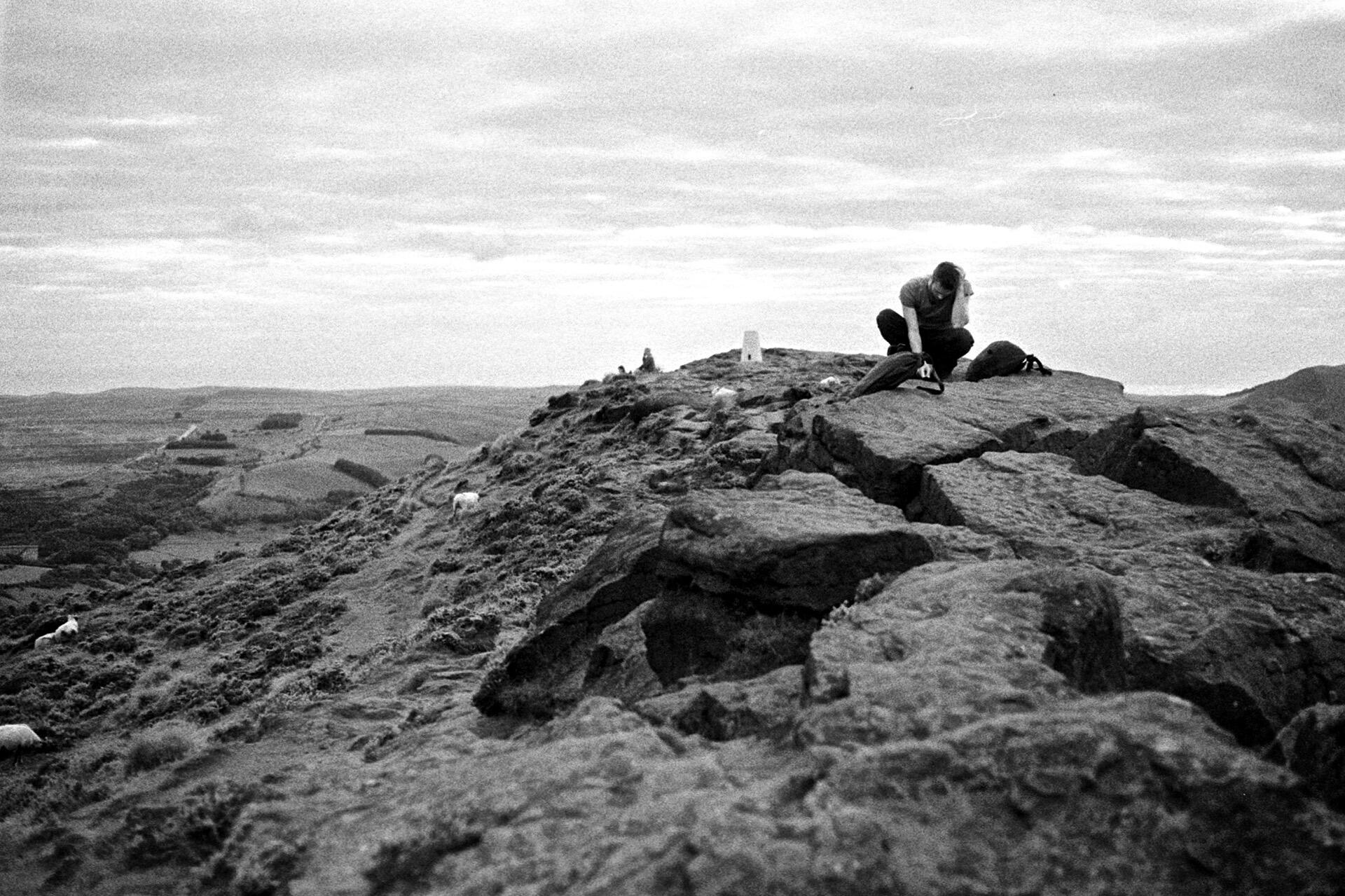 My problem with my years is that they’re usually a confusing mess, running project to project, city to city, and if I try to sum them up it usually doesn’t make a lot of sense. This year was a little more structured than most. It went something roughly like:

January & February – it looks from my diary like I was travelling between Perth, Canberra, Melbourne and Sydney. Doesn’t look like I spent more than a week in any one place, hard to tell what I was doing, other than the Water Futures conference in Melbourne.

March – Castlemaine, Victoria, for the Castlemaine Festival with Gobyerno, then Shanghai with Best Festival Ever.

September & October – Sweden. In Linköping with Bec, and Stockholm for a couple weeks.

November – Back to London, more Coney.

(That was more for myself than for anyone else, it’s good to be across your own trajectory I guess.)

Anyway, I spent a bit of time yesterday thinking through my projects this year, and in particular, thinking how I handled them, whether I’m happy with my efforts or not. Out of curiosity, I tried scoring myself. Why not? Like Linton said to me this year after swimming at the London Aquatic Centre: can’t manage what you don’t measure.

So for each project, a score out of five. It has nothing to do with the success of the project, or the quality of the art – purely my own assessment of how I went. Did I bring my best focused efforts, or did I coast? & so on.

Life Raft – 3/5
One of my Coney briefs was to help Tassos devise a game for classroom students based on Fin Kennedy’s play. I ended up coming up with the most complex, multi-element game I’ve ever made – too much for a teacher to facilitate, but enough in it for Tassos to extract some useful elements. Didn’t get to follow through on the second phase development, tho, so not a finished job in some ways.

95 Years or Less – 4/5
Nikki Kennedy more or less built this one while I was scrambling around in between projects. But while I was there, it felt like the process was functioning well, and what we came up with was a strong and sharp prototype, building on the BFE form but with an interesting (and flawed) new decision-making game at the core of it.

The Shadow of the Future – 1/5
I started this Coney project (commissioned by the Imperial War Museum) with a strong idea – building on the prisoner’s dilemma tournaments of the 70s and a Cold War setting – but I didn’t produce much more than a decision-making mechanism, which the rest of Coney then took and developed into a totally new cross-platform format, with a whole new script. I didn’t do enough to satisfy myself here.

Science Gallery London – 3/5
Michelle McMahon and I ran two workshops for SGL in November. Still in process, but what I’m happy about here was the recalibration we did in between the two sessions, so that the second one felt properly targeted and landed well.

Save Our School / Run A Bank / Pharmacy Game – 4/5
A big part of my output this year was developing a new format of systems games that can be swiftly adapted, repurposed for new contexts, and delivered by a single facilitator. I’m happy because of the core game that sits inside these pieces (an exercise in which players deal with multiple tasks at the same time in a self-directed way) and because the finale is a good evolution of the madlibs format we’ve been playing with since early BFE. I’m also happy because for once in my life, I really worked through multiple playtests and kept coming back and making fixes, despite wanting it to be finished multiple times. Muttley’d be proud of me.

Gobyerno – 1/5
No complaints here, but delivering Gobyerno in Castlemaine was super fun, satisfying, energising, but it was the same show we’d built and run previously in Darwin. Can’t give myself any points because I was there as a facilitator, not a maker. But I now have young friends in Castlemaine, which is pretty fucking great.

Peak District – 1/5
This is genuinely my biggest regret of the year. Jordan and I took cameras and recording gear to the Peak District and spent a weekend walking and recording spoken word pieces. I didn’t take the time to properly write anything good in preparation. All the excuses – I was busy, it was a break weekend as much as a creative intensive etc – but the fact is, how often do you get a weekend away with Jordan Prosser to make new stuff? Don’t fucking waste it, Finig.

EGU essay – 2/5
Writing a long non-fiction essay about the European General Assembly of earth scientists I attended was a good move. Getting feedback from close collaborators and editing it over and over was a good move. But I didn’t land it anywhere, and that’s one of the main things I wanted to learn from doing it. Never get backed into a corner – but I let that piece get backed into a corner.

Water Futures – 1/5
I was there, and it was grand, but I was really just following Matt Wicking and Angharad Wynne-Jones’ lead. Sitting somewhere between facilitator and participant, I don’t think I contributed as much as I could/should have.

End Science Now – 3/5
A detailed treatment of a new script, a globe-trotting Tom Clancy / John Le Carre-style thriller about an undercover operative bringing down science itself. It has no home, but it was a valuable thing to research, to plan out in detail. Happy with the process so far, except that the draft is not yet done and so I can’t even share it yet for feedback. And there’s an unanswered question about the value of embarking on a big script project for something that is unlikely to ever be staged, but nothing is ever wasted, not really.

Are You Ready To Take The Law Into Your Own Hands? – 4/5
Taking an old idea for a vigilante story about a group of superfans on the hunt for a kidnapped popstar, adapting it to a Philippines setting, bringing it to Sipat Lawin. I didn’t do much more than write a skeletal draft, but I give myself points for correctly guessing a couple of elements that Sipat could build on to explosive effect. Watching this one rapidly transform as it hits a Filipino context and flies out of my hands into theirs has been one of the most satisfying creative experiences of the year.

44 Sex Acts In One Week – 3/5
Took my skeletal first draft for a Matthew McConnaghey / Kate Hudson romantic comedy, did a proper rewrite, and now I have… the straightest play I’ve ever written. I need to dive back in and do another round of edits based on feedback I’ve gotten, but then I have the job of making it weird. I don’t know what will happen with this one, but I’m pleased I’ve given myself a normal-shaped script, my very first.

Untitled Sex Play – 4/5
A week with Anthea at Battersea Arts Centre, this was one of those processes where we spent a lot of time clearing the undergrowth and getting down to the core questions, a solid foundation to build from. The thing I’m happiest about here is not anything I made or wrote, but the things I threw away. This was the first development of one of those multi-year slow building projects, and it was good to start by shedding a whole lot of assumptions and expectations. And we found a whole new language of working together (frequent dance breaks) that felt pretty lovely.

Kill Climate Deniers (solo show) – 1/5
Again, no points for repeating existing works. But I will say that I didn’t quite land the UK shows. Lots of reasons for that, and lots of lessons about what kind of content does work in this setting, but I can’t claim any sort of victory until I take those lessons and do something with them. Which: not yet.

Kill Climate Deniers (rewrites) – 3/5
I’m not good at rewrites or edits, and so it was a good experience going back to the script and rewriting it for the Griffin run. Folded in a brand new meta-play, updated a lot of the gags, and… look, I enjoyed doing it, but it’s impossible to score this one properly without seeing how it works on the floor. Rehearsals start next month at Griffin, we shall see.

Kill Climate Deniers (essay for HowlRound) – 3/5
This was a pleasure to write, and a pleasure getting to work with an editor. But it was short, so not too much learning.

Elevator Pitches – 2/5
Kieran Ruffles hit me up with a proposal for building a new podcast series of micro episodes, pitches for new works less than two minutes long. This kind of project is exactly the kind of thing I’m wired for, it couldn’t be more to my taste. & yet: so far, I only have 4-5 play pitches I’m really satisfied by. You gotta be an ideas generating machine, Finig, and my brain veered too quickly towards the absurd sketch show format of 22 Short Plays, which, this is not that. But I came up with a new outlet for the old Finnigan and Brother song ‘Looting The Aquarium’ as an end-of-days heist movie about the value of preserving wildlife amidst our own collapsing infrastructure (and Hana Martin came up with the tagline ‘We All Sink Together’), so it’s a project pointed in the right direction.

Appropriate Kissing For All Occasions – 2/5
After Louise Howlett produced this one for Melbourne Fringe, she hit up Isab and I for an extended rewrite. Not a high score yet because we’ve just begun work. We’ll see. The risk is that we’ve picked an angle and gone in on it hard, and though I have faith that we know what we’re doing, the original was built up over a lot of test shows and Isab trying it out on the floor. You can’t fake that work. So it’s all provisional.

Best Festival Ever – 2/5
We did the show in Shanghai! It was magic! By my scoring system here I should give myself only 1 point because we didn’t make anything new, but a bonus point because we had maybe our best night out as a company ever, in a vegetarian restaurant in the French quarter after a day of Shanghai exploring.

New play! Are You Ready To Take The Law Into Your Own Hands? Kill Climate Deniers: staging an unstageable play